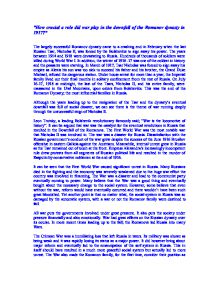 How crucial a role did war play in the downfall of the Romanov dynasty in 1917?

"How crucial a role did war play in the downfall of the Romanov dynasty in 1917?" The largely successful Romanov dynasty came to a crashing end in February when the last Russian Tsar, Nicholas II, was forced by the Bolsheviks to sign away his power. The years between 1914 and 1918 were devastating to Russia. Hundreds of thousands of soldiers were killed during World War I. In addition, the winter of 1916-17 was one of the coldest in history and the peasants were starving. In March of 1917, Tsar Nicholas was forced to sign away his empire as Alexis his son was too sick to succeed his father and his brother, the Grand Duke Michael, refused the dangerous station. Under house-arrest for more than a year, the Imperial family lived out their final months in solitary confinement from the rest of Russia. On July 16-17, 1918 at midnight, the last of the Tsars, Nicholas II, and his entire family, were massacred in the Ural Mountains, upon orders from Bolsheviks. This was the end of the Romanov Dynasty; the most influential families in Russia. Although the years leading up to the resignation of the Tsar and the dynasty's eventual downfall was full of social disaster, we can see there is the theme of war running deeply through the unsuccessful reign of Nicholas II. Leon Trotsky, a leading Bolshevik revolutionary famously said; "War is the locomotive of history". It can be argued that war was the catalyst for the eventual revolutions in Russia that resulted in the Downfall of the Romanovs. The First World War was the most notable war that Nicholas II was involved in. The war was a disaster for Russia. Dissatisfaction with the Russian government's conduct of the war grew despite the success of the June 1916 Brusilov offensive in eastern Galicia against the Austrians. Meanwhile, internal unrest grew in Russia as the Tsar remained out of touch at the front. ...read more.

There were great implications of the defeat in the First World War for Russia. Another defeat for Russia in another War made the Russian people lose great confidence in their leader. They saw the Tsar as a father figure; however this image was rapidly fading as he was constantly leading his 'children' into slaughter. To add to growing unrest, the financial situation of Russia was worsening. The government had to borrow money of over nations and therefore the value of the Rubel fell. Inflation was the result and this lead to worsening living conditions. As the countries resources were pumped into the war effort, there was a lack of food. Napoleon famously said; "An army marches on its stomach". This was the case and as all the food was at the front line, those back at home were suffering. Especially over the cold winter, social unrest rose due to the lack of food. Riots became a regular occurrence and strains began to form on the Tsar. By 1917, 3.5 million factory workers worked in the towns. They could not grow their own food and therefore they relied on being supplied it by the country. This did not happen and a gap appeared between the town dwellers and the country dwellers. The social unrest was handled badly by the Tsar. He appointed old conservative ministers to lead the country and deserted the capital to lead his troops. He became disappointed with his new appointments and decided to remove all his government and take sole responsibility for the countries running. Although the Tsar took time out to support his troops, they quickly lost faith in him and when they were called upon to fire upon some protestors they refused. They refused to obey his orders and demanded the Tsar step down out of power. We can see that the impact of war on the Romanov family was large. ...read more.

Many believed that the Tsar had made good appointments that looked promising for the future of Russia. Nicholas II embarked on a period of reform in the early 1900s which lead to an opportunity for the Tsar to remove himself from the limelight and let his government take control. He could have given his people a democracy. However, the Tsars belief that he was appointed by God to rule ruled out and he continued to keep control. After too much reform, Nicholas became scared and sacked all his reformist ministers from office. Due to his growing personal problems with Rasputin, Nicholas was becoming confused with his politics. He turned to war as the solution to all problems. In conclusion to how crucial a role did war play in the downfall of the Romanov dynasty in 1917, we can see that War played a large part in the collapse of the dynasty. However, it is debatable whether it was the only factor involved in the downfall. It is safe to say that many other factors were involved in bringing the regime to an end. The lack of reform was a huge factor in the fall. The Tsar refused to sustain a period of reform which liberated the peasants and made life bearable for them. The Tsar emancipated the serfs yet failed to follow up reforms and subsequently left the social state in a mess. Despite making good appointments to help govern, once reform appeared the Tsar became scared and removed them. Along with this, the increased pressure from society due to lack of food and poor living conditions caused great pressure on the regime. Ultimately we can see that without war, the regime may have had a chance. The regime seemed to be in an appalling state by 1914, however with a little more time and stability the regime may have been able to reform its way out of trouble. War was therefore a crucial catalyst in the downfall of the dynasty, but without it the downfall seemed almost certain anyway. ...read more.