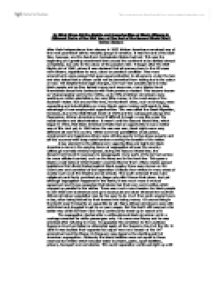 How Did Black Rights Vary Across America After WW2?

In What Ways did the Rights and Opportunities of Black Citizens in Different Parts of the USA Vary at the End of the Second World War? Bethan Siddons After their independence from slavery in 1865 African Americans remained one of the most prominent ethnic minority groups in America. It was the end of the Civil War, however, and the Southern Confederate States had lost. This was the beginning of a growing resentment that caused the continent to be divided almost completely, due only to the colour of the people's skin. It began after the Civil Rights Act of 1866, where it was declared that all persons born in the US were now citizens, regardless to race, colour or previous condition. Two more amendments were passed that gave equal protection to all persons under the law and also stated that a citizen could not be prevented from voting due to his colour or race. Yet despite these legal changes, not much was actually done to help black people and as they lacked money and resources, many blacks found themselves forced into contracts with their previous masters. This became known as 'sharecropping' and by the 1930s, up to 75% of African-Americans were working on cotton plantations, for very little money, in the rural areas of the Southern states. ...read more.

Black teachers were also paid half as much as white teachers. This led to enforced r****m as black and white Americans were exposed to eachother in unequal statuses. It was also significant as it began a growing determination in African Americans to make their lives better which is why membership to the biggest pressure group for their advancement, grew from 50,000 to 450,000 in 1945. The National Association for the Advancement of Coloured People (NAACP) was set up in 1909 to improve the lives of black people in America. It funded court cases and set up demonstrations. Another reason for the steep increase in membership may have been because blacks became as determined to stamp out r****m in America as much as they had stamped out fascism in Germany. Due to the differences in segregation laws, both the north and South provided opposing job opportunities for blacks which led to a migration northwards. After the war, sharecropping was still a major part of African-American lives in the rural areas of the South. The poor pay limited the conditions of the workers lives and many lived in small wooden shacks on the land they were expected to work on everyday. Often working from an extremely young age, children didn't tend to get an education which led to many illiterate adults in the years to come. ...read more.

(As proven with the murder of Emmet Till almost 10 years later where the Government never intervened). This is confirmation that black rights were very different to the opportunities that existed in practise as black Americans were supposed to be protected by the Government under the 15th amendment yet not surprisingly, they weren't. This happened with many supposed 'rights' that blacks were given. To see the social, cultural and political diversity in the different parts of America is really to view the rights that blacks were theoretically given. According to passed laws and various evidence, it seems that living in the North was a far better way of life for black Americans and that it would welcome home black soldiers whereas the South was extremely r****t and almost Neanderthal in their views. Yet in real life the differences were quite small between the two areas. r****m still brewed, race riots still took place if black people began to be treated fairly and the Ku Klux Klan still occasionally lynched no matter where you were. If an African-American made it to a high position, they would still face stiff opposition and would never receive the respect deserved. Although the standard of living for blacks may have been slightly higher in the north, none were yet receiving the rights or opportunities that every person warrants and it was years afterwards that they finally began making progress. ...read more.