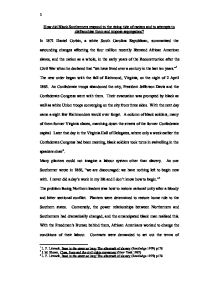 How did Black Southerners respond to the rising tide of racism and to attempts to disfranchise them and impose segregation?

How did Black Southerners respond to the rising tide of racism and to attempts to disfranchise them and impose segregation? In 1871 Daniel Corbin, a white South Carolina Republican, summarized the astounding changes affecting the four million recently liberated African American slaves, and the nation as a whole, in the early years of the Reconstruction after the Civil War when he declared that "we have lived over a century in the last ten years."1 The new order began with the fall of Richmond, Virginia, on the night of 2 April 1865. As Confederate troops abandoned the city, President Jefferson Davis and the Confederate Congress went with them. Their evacuation was prompted by black as well as white Union troops converging on the city from three sides. With the next day came a sight few Richmonders would ever forget. A column of black soldiers, many of them former Virginia slaves, marching down the streets of the former Confederate capital. Later that day in the Virginia Hall of Delegates, where only a week earlier the Confederate Congress had been meeting, black soldiers took turns in swivelling in the speakers chair2. Many planters could not imagine a labour system other than slavery. As one Southerner wrote in 1866, "we are discouraged: we have nothing left to begin new with. I never did a day's work in my life and I don't know how to begin."3 The problem facing Northern leaders was how to restore national unity after a bloody and bitter sectional conflict. ...read more.

Some 91 per cent of the freed persons lived in the rural South. Largely illiterate and poor, they nonetheless shared among themselves, their kin, and neighbours the joys and pains of work10. The nuclear family that was the usual late-nineteenth-century family form began evolving within the context of a larger flexible family network that included neighbours who were often related and for periods lived within families' households. Many African Americans lived in small clusters consisting of circles of relatives inhabiting a given locality11. Thus, the atmosphere of the time was one of affiliation, a community spirit existed that helped promote the black cause and at the same time offered protection. The end of the Confederacy similarly emancipated the black church. The African Methodist Episcopal Church founded in Philadelphia by Richard Allen in 1787 represented the antebellum expression of blacks' religious independence. However, the emergence of the black church as a separate institution had to await the end of slavery, since white southerners sought to maintain control over African Americans' worship, for both religious and social reasons12. Once emancipation had been installed by the victorious North, the church began to play an increasingly vital role in the black community. Once established, black churches spread rapidly throughout the South. Because of their decentralized structure, the Baptist churches led in this proliferation. As the number of Baptist churches grew, they met regularly in regional conventions that then evolved into statewide and national organizations. ...read more.

The failure of Reconstruction had another significant effect on the African American community. Leaders organized various migrations from the South, to Kansas, Colorado, California, Montana, and Oklahoma. These movements were very much political in origin, because their goal was more than to homestead the land. The aim was to locate to a place where blacks could develop their lands and resources unmolested21. In the early 1880's, Edward McCabe led nearly 40,000 blacks to Oklahoma. McCabe was convinced that Oklahoma would be a more suitable place for the African American. The southern climate and Indian population seemed to be an enticing option22. The migration to Oklahoma was the largest political migration of blacks to the West, but every Western state and territory received some African Americans. By 1900, more than 145,000 blacks had settled in the sixteen western states and territories excluding Texas. In sum, the southern blacks responded by grouping together and forming their own close-knit communities. At the centre of this new community was the church. The church was the cornerstone of the battle against racism, without the church, the political success gained in later years would not have happened. African Americans created their own salvation through the church. Worship, song, and dance may seem trivial in the grander scheme but they carried the Negro race through the hardships of post Civil War Reconstruction. Education and the exploitation of the press would not have been available without the support of the church. The reverence the clergymen were held in was unprecedented. This is seen by the emergence of Martin Luther King years later. ...read more.