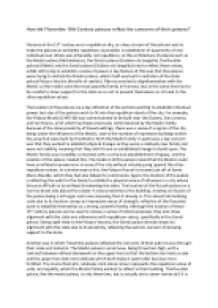 How did Florentine 15th Century palaces reflect the concerns of their patrons?

ï»¿How did Florentine 15th Century palaces reflect the concerns of their patrons? Florence in the 15th century was a republican city, so a key concern of the patrons was to make the palaces as evidently republican as possible. A celebration of superiority of one individual over others was inherently not republican, so the architecture of palaces such as the Medici palace (Michelelozzo), the Strozzi palace (Giuliano da Sangallo), the Rucellai palace (Alberti) and the Gondi palace (Giuliano da Sangallo) tried to reflect these values, whilst still trying to establish a sense of power. A key feature of this was that the palaces were trying to imitate the Medici palace, which itself was built in imitation of the state palace Palazzo Vecchio (Arnolfo di cambio). Patrons wanted to alignthemselves with the Medici as the medici were the most powerful family in florence, but at the same time had to be careful to show support for the state so as not to present themselves as a threat to the cities republican values. The location of the palaces are a key reflection of the patrons wanting to establish individual power, but also of the patrons wish to fit into the republican ideals of the city. For example, the Palazzo Medici (1445-60) was commissioned to be built near the Duomo, San Lorenzo, and San Marco, all of which had been previously commissioned by the Medici family. ...read more.

The Medici palace is enormous, being three tiers high, with a contrast between refined stonework on the upper tiers so that the bottom tier looks cruder and the upper tiers look more delicate which both make it seem taller but also more fortified. The monochromatic, relatively dark stone colour represents the republican value of unity and equality, which the Medici family wanted to reflect in their building. The Ruccelai palace, like the medici palace, is only three tiers, but is actually six to seven stories tall. It is much larger than it seems, but in order to adhere to the republican values in which individual power was not emphasised, this illusion of the building being smaller than it actually is meant that the Rucellai could show support for the state whilst also still having an incredibly large scale palace. The articulation of the stones help to make the palace seem much less massive, especially as the element of fragmentation breaks the building down in the viewers eye and makes it seem much less imposing, and therefore much less imposing to the power of the state. The material of the palaces also helped to reflect the individual concerns of the patrons hwo wanted to show wealth, through the use of rustification in all four palaces, as rustification required more stone thus reflected a higher level of wealth. ...read more.

The patrons all wanted to align themselves with the state in order to show support of the republican values, therefore wanted to align themselves with the Palazzo Veccio, the state palace. Thus the palaces went along with the state convention for architecture to show that they werenâ€™t a trheat to the state. In the Gondi, Strozzi and Ruccelais attempts to imitate the Medici palace, they were also imitating the Veccio palace as the Medici palace itself was built in imitation of the veccio palace, for example in the similar sense of increasing fenestration as the building ascends, and also having a very similar sense of fortification. So while the patrons wanted to show innovation in order to push the city forward, due to the competition from other cities such as pisa and siena, their main focus had to be on keeping in line with republican values whilst establishing their own sense of power. As Timeoto Maffei said, â€œ(palazzo medici was) not built to suit cosimos needs, but to adorn a great cityâ€, showing how the key concern of the patron was to find ways to justify these public displays of private wealth and power. Within the confinemnets of the Republican values of cultural development the easiest way for the patorns to establish their own status, a physical establishment of wealth and power was important in order to create lineage whilst keeping with republican values. ...read more.