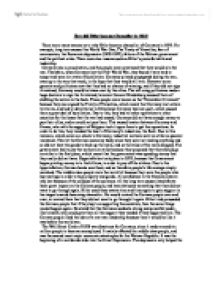 How did Hitler become chancellor in 1933?

How did Hitler become Chancellor in 1933? There were many reasons as to why Hitler became chancellor of Germany in 1933. For example, long term causes like World War One, The Treaty of Versailles, fear of communism, the Economic depression (1929-1933), failure of the Weimar government and the political crisis. There were also reasons such as Hitler's powerful skills and leadership. Germany was a proud nation, and the people were convinced that they would win the war. Therefore, when Germany lost the First World War, they found it very hard to accept and were in a state of humiliation. Germany printed propaganda during the war, even up to the very last week, in the hope that they would still win. However some generals and politicians new that they had no chance of winning, and if they did not sign Armistead, Germany would be taken over by the allies. The left-wing politicians made a huge decision to sign the Armistead; however General Hindenburg accused them of stabbing the nation in the back. These people were known as the "November Criminals" because they also signed the Treaty of Versailles, which meant that Germany lost certain territories, and had to demilitarise in Rhineland. ...read more.

These tactics boosted n**i support among the depressed massively and the rise in the number of n**i seats in the Reichstag reached an all time high of 107, up from 12 seats two years before. The Nazis had an organised party, of which most had fought in the war and therefore had political skills. The Nazis had great leaders at every level, which was a key to their success. The Nazis were masters of propaganda, and they used tricks to deliver their thoughts and messages. They had absolute power, since their propaganda skills had the ability to change the public's opinions and views. The Nazis used all the latest technology to deliver rallies and speeches. They used the radio frequently, and so naturally their word was spread throughout Germany. The Nazis were also clever by making sure that they included every sector of the German society. They made sure that they gave each section something that they wanted, and so persuaded people that there was something for everyone. There was a political crisis from 1930 to 1933, where the coalition government failed to work together to make new laws. Hindenburg used his power to dissolve the Reichstag and then held another election in July 1932. ...read more.

Their share of the votes fell from 230 to 196 seats. The chancellor Franz Von Papen could not get enough support from the Reichstag, and so offered Hitler the post of vice Chancellor if he promised to support them. However Hitler refused since he demanded to become Chancellor. Von Papen and Hindenburg took a big risk on 30 January 1933, and made Hitler Chancellor, since they hoped that they could control Hitler, however they were very wrong. Hitler's accession to power was not inevitable. The years of 1919 - 29 were important for the n**i Party because it was capable of attracting mass voters. The n**i Party's ability to take advantage of circumstances as they arose eventually placed Hitler into power. Through the strength of its leader, tight organisational structure and its use of propaganda and use of modern technology, the n**i Party took root and grew in Germany, 1920s. I think that although all the events and factors mentioned above played important roles in Hitler's road to chancellorship, there is one that played the largest of all. I believe that it was the Political manoeuvring between von Scheilcher and von Papen. Without this, Hitler would not have become chancellor. If there was a gap in the factors leading up to his succession, then I believe that the final factor may not have been reached. ...read more.