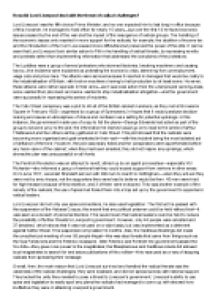 How did Lord Liverpool deal with the threat of radical challenges?

﻿How did Lord Liverpool deal with the threat of radical challenges? Lord Liverpool was the fifth choice Prime Minister, and no one expected him to last long in office because of this; however, he managed to hold office for nearly 15 years?but over the first 10 he faced economic issues caused by the end of the war and the impact of the resurgence of radical groups. The handling of the economic issues only resorted in more support for the radicals; for example, the abolition of income tax and the introduction of the Corn Law caused more difficulties but preserved the power of the elite. It can be seen that Lord Liverpool took similar action to Pitt in his handling of radical threats, by repressing revolts and protests rather than implementing reformation that addressed the complains of the protestors. ...read more.

In this instance, the government made use of a spy to foil the plans?George Edwards had acted as part of the group to become privy to the plot; the information he learned would go on to lead to the arrest of Arthur Thistlewood and four others as they gathered in Cato Street. This plot showed that the radicals were becoming more organised and goal-orientated in their work?with this incident being the most isolated act of defiance of the time. However, the plot was easily foiled and the conspirators were apprehended before any harm came of the cabinet; when they had been arrested, they did not inspire any uprisings, which shows the plan was unsuccessful on all fronts. The Pentrich Revolution was an attempt to revolt, stirred up by an agent provocateur?especially WJ Richards?who informed a group of workers that they could expect support from workers in other areas. ...read more.

This suspension only lasted 10 months. Also, the Seditious Meetings Act made the unauthorized meeting of over 50 people illegal?this was stop threats that came from things such as the Spa Fields riots and the Peterloo massacre. After Peterloo and Pentrich the government passed the Six Acts?they gave more power to the magistrates; the Blasphemous and Seditious Libels Act allowed local magistrates to search for and seize publications of this volition?this was used as a way of stopping radicals from spreading their message. Overall, then, the main reason that Lord Liverpool survived and handled the radical threats was the weakness of the radical challenges; they were localised, and did not spread across with national support. They lacked the unity they needed to pose a threat to Liverpool?s government. Liverpool?s ability to use spies and legislation to easily spoil any plans the radicals had managed to come up with showed how ineffective they were in attacking Liverpool?s government. ...read more.