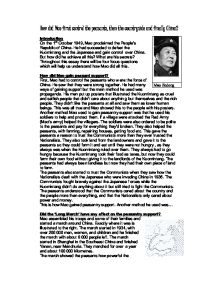 How did Mao first control the peasants, then the countryside and finally China?

How did Mao first control the peasants, then the countryside and finally China? Mao Zedong Introduction On the 1st October 1949, Mao proclaimed the People's Republic of China. He had succeeded to defeat the Kuomintang and the Japanese and gain control over China. But how did he achieve all this? What are his secrets? Throughout this essay there will be four focus questions which will help us understand how Mao did all this. How did Mao gain peasant support? First, Mao had to control the peasants who were the force of China. He saw that they were strong together. He had many ways of gaining support but the main method he used was propaganda. His men put up posters that illustrated the Kuomintang as cruel and selfish people that didn't care about anything but themselves and the rich people. They didn't like the peasants at all and saw them as lower human beings. This was all true and Mao showed this to the people with his posters. Another method Mao used to gain peasantry support was that he used his soldiers to help and protect them. ...read more.

The march showed strength and power and also a caring for the people, because they marched through peasantry areas and not cities, which were controlled by the nationalists. The Communists army were not strong enough to face the Nationalists in a battle face to face. But by doing the 'Long March' didn't help the Communists to defeat the Nationalists, only weaken them. Mao had to use different methods to defeat the Nationalists. What methods did Mao use to defeat the Kuomintang? Mao had before tried to gain a lot of peasantry support, and he was successful doing this. But by gaining support didn't give him the power to defeat the Kuomintang. As said, he had to use other methods to defeat them. One of the methods he used was guerrilla tactics. This means basically that he attacked during the night and that he was hiding during the day. The Communist forces made hit-and-run attacks against Nationalist troops and camps and after disappearing into the dark. His army was not strong enough to face the Kuomintang so he had to hide. As known, the Japanese and the Kuomintang had better technology in the sense of weapons and such. ...read more.

But the countryside was not enough for Mao. Step by step he took control over China. Bu how did he finally gain control over China? How did Mao finally take over China? Now when Mao controlled the peasants and the countryside, he reached to control China. He worked years to plan the defeat of the Kuomintang and finally he had an army big enough to face Chiang Kai-shek's. The open battle happened in 1948 and the winner was Mao and his Communists. Chiang fled with 200 000 men to the island of Taiwan By defeating the Nationalists he had no longer any threat against China so by this event he ruled China. Conclusion In conclusion I think that Mao was a brilliant leader and that he knew how to win the people's heart and take over China with a variety of methods. He gave the land back to the people that rightfully belonged to them. By gaining peasantry support he was able to gain support from the countryside and finally China. I wonder what would've happened to China if Chiang had won the last battle. Maybe China would've been under Nationalist control and be a very miserable country. Who knows? Magnus Haag 2001-11-29 Social Studies Sources Davies, Evan. Aspects of Modern World History. Hodder & Stoughton, 1990 Britannica Focus(r) DVD ...read more.