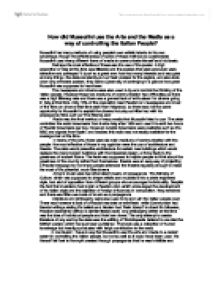 How did Mussolini use the Arts and the Media as a way of controlling the Italian People?

How did Mussolini use the Arts and the Media as a way of controlling the Italian People? Mussolini had many methods of using people's own artistic talents to his own advantage, though the effectiveness of some of these methods is questionable. Mussolini used many different forms of media to communicate himself and his ideals. Perhaps the most effective of these was the use of the poster. A high proportion of Italy at this time was illiterate and the posters that were produced were attractive and portrayed 'Il duce' as a great man how had many interests and was grea at many things. the state constantly put up fresh posters for the regime, and also took down any anti-state posters. ...read more.

The state controlled the radio broadcasts from inside Italy after 1924 and used it to emit two hours of Fascist broadcasts per day. However outside broadcasts were available such as the BBC and signals from Spain, and besides this radio was not easily available for the average man at the time. In terms of the Arts, there were six main mediums of communication with the people. the most effective of these in my oppinion were the use of architecture and theatre. The state would prescribe architecture for certain new buildings which would replace the more modern buildings with the Classical design, a throw back to the greatness of ancient Rome. ...read more.

while Communism had Marxist writings stating it's beliefs and Nazism had 'Mein Kempf' to direct it's followers, Fascism reamained without a similar literary work. Any philosophy written at the time was the idea of individual people and their own views. The only attempt to create literature of any sort by the state was the writting of 'Enciclopedia Italiana' to counter the Brittish version which had just been published. The book was a collection of human knowledge but heavily punctuated with Italy's contribution to the world. In conclusion I have to say that Mussolini used the arts and media to a certain extent in controlling the Italian people, but not as well as it could have been used. He himself fell fowl to the myth created through propaganda that he was infallible and eventually the Italian people saw Mussolini for what he was. Conor Caldwell ...read more.