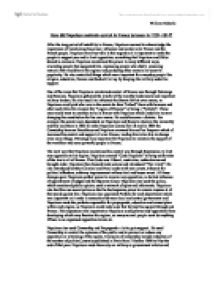 How did Napoleon maintain control in France between in 1799-1814?

How did Napoleon maintain control in France between in 1799-1814? After the long period of instability in France, Napoleon seemed to acknowledge the importance of maintaining his power, influence and control over France and the French people. Napoleon was very able in this regard as it is important to make the people to support you and to limit opposition, something that Napoleon and Hitler shared in common. Napoleon maintained his power in many different ways, rewarding people that supported him, repressing people who didn't, censoring material that would harm his regime and producing other material to boost its popularity. He also controlled things which were important for everyday people like religion, education, finance and backed it all up by keeping the military under his support. One of the ways that Napoleon maintained control of France was through Patronage and Honours. Napoleon gathered the loyalty of the wealthy landowners and important military leaders. He also used it to influence the Senate for his own means, as Napoleon could pick who was in the senate he then "bribed" them with honours and other such titles for example the "Legion of Honour" or being a "Notable". These men would want to continue to be in favour with Napoleon which leads him to start changing the constitution for his own means. He could become a dictator. For example the senate were dependent on Napoleon and feared a return to the monarchy and this lead them in 1802 ...read more.

Napoleon could completely prevent any negative material from being produced which gave him the important power of controlling the public's opinion. He increased this by his use of propaganda by using Artists, sculptors and architects for monuments, statues and paintings depicting Napoleon as a romantic hero-figure and increasing the feeling of an Empire. This was how Napoleon wanted the people to see him as; strong, rightful leader with legitimate position and hardworking and a great military leader. By getting the public to love and support him by restricting and controlling there opinions this consolidated his position greatly as ruler of France. Napoleon believed that religion acted as "social cement" and that it would help bring political and social peace to France. Catholicism had been identified with the royalist cause therefore napoleon wanted to identify it with the people, to re-unite it with the state under Napoleon's control. This would bring peace and stability and draw Catholics away from Bourbon support. In 1801 Napoleon and the Pope Pius VII made a Concordat. Napoleon wanted to give the people a religion but under the hands of the government in return the Church recognised the revolution and wouldn't try to recover church lands, a fear which had been plaguing certain landowners after the revolution in case Napoleon lost power so this further increased his popularity with the people who had become wealthy out of the revolution. ...read more.

He also makes the Tax collectors more official and efficient with the Tax Register. In order to gain money there were many direct and in-direct taxes, he also introduced a new metal coinage in 1803. Napoleon was quite successful in sorting out the economy which helped it grow and pay off debts and there were no big shifts of inflation or deflation. Napoleon also maintained the support of the military, as this could be a possible threat to his power if another Coup would occur. He would also need the loyalty of the army to deal with any opposition and to expand French territories. Napoleon gained the support of the army through a variety of means including Patronage of officers, by offering there sons a free and militarised education. He also used propaganda and censorship to increase morale of the army, especially the image that Napoleon was the rightful leader of France. Out of all of the different ways that Napoleon maintained his control over France, the one which was the most important was his excellent use of censorship and propaganda to win over the support of the public, which is key for all leaders. By presenting himself as a legendary and rightful leader, as a romantic hero-figure, the child of the revolution and the key to future French greatness and blocking the bad parts of his regime from the public opinion. This made the people not only support him but love him and this devotion was key to Napoleon staying in power in France. ?? ?? ?? ?? William Nicholls ...read more.