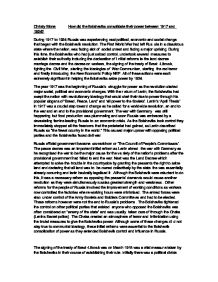 How did the Bolsheviks consolidate their power between 1917 and 1924?

Christy Stone How did the Bolsheviks consolidate their power between 1917 and 1924? During 1917 to 1924 Russia was experiencing vast political, economic and social change that began with the Bolshevik revolution. The First World War had left Russia in a disastrous state where the nation, was facing alot of social unrest and facing a major uprising. During this time, the Bolsheviks who had just seized control, undertook several measures to establish their authority including the declaration of initial reforms ie the land decree marriage decree and the decree on workers, the signing of the treaty of Brest-Litovsk, fighting the Civil War, starting the ideologies of War Communism, starting the red terror and finally introducing the New Economic Policy NEP. All of these actions were each extremely significant in helping the Bolsheviks seize power by 1924. The year 1917 was the beginning of Russia's struggle for power as the revolution started major social, political and economic changes. With the return of Lenin, the Bolsheviks had swept the nation with revolutionary ideology that would start their rise to power through his popular slogans of 'Bread, Peace, Land' and 'all power to the Soviets'. ...read more.

Although the Bolshevik were reluctant to do this, it was a necessary reform as opposing the peasants' demands would cause another revolution as they were simultaneously russias greatest strength and weakness. Other reforms for the people of Russia involved the improvement of working conditions as workers now controlled the factories where working hours were minimised. The armed forces were also under control of the Army Soviets and Soldiers Committees and had to be elected. These reforms however were not the end to Russia's problems. The Bolsheviks tightened the control on other political parties that existed anyone who opposed the Bolsheviks was often considered an "enemy of the state" and was usually taken care of through the Cheka (Lenins Secret police). The Cheka created an atmosphere of terror and intimidation using the brutal measures to give the Bolsheviks power. Although some of these changes did not stay true to communist ideology, these initial reforms were essential to the Bolshevik consolidation of power as they extended Bolshevik control and influence in Russia. The signing of the treaty of Brest-Litovsk was on March 1918 was a vital measure taken by the Bolsheviks in their course of establishing their rule. ...read more.

The Red Terror was also a key factor in the civil war that was crucial to the Bolshevik consolidation of power. The Red Terror consisted of merciless arrest, torture and execution carried out by the Cheka to eliminate political enemies and anyone who opposed Bolshevik rule. The New Economic Policy (NEP) was one of the final and most important measures taken by the Bolsheviks in order to consolidate power. The NEP was introduced almost as a direct result of the Kronstadt rebellion in 1921 where the Kronstadt sailors who were initially in favour of the Bolsheviks so their rebellion was very significant. Lenin described it as the flash in the pan that lit up reality most. In conclusion the period of 1917 to 1924 was a time of great social, political and economic turbulence for Russia. The growing political tension and social unrest left Russia very unstable. It was necessary for the Bolshevik regime to take their hold on power and consolidate it to ensure their own survival. The initial reforms of 1917, the treaty of Brest-Litovsk, the civil war, the introduction of War Communism, the Red Terror and the NEP were all significant steps in the Bolsheviks drive for the consolidation of power. These measures were key for the Bolsheviks to seize power. ...read more.