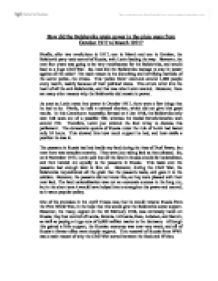 How did the Bolsheviks retain power in the crisis years from October 1917 to March 1921? Finally, after two revolutions in 1917, one in March and one in October, the Bolshevik party took control of Russia, with Lenin leading the way. However, the next four years was going to be very troublesome for the Bolsheviks, and would lead to a huge Civil War. So, how did the Bolsheviks manage to stay in power against all the odds? The main reason is the disturbing and horrifying methods of the secret police, the Cheka. This 'police force' executed around 1,000 people every month, mainly because of their political views. This struck terror into the heart of all the anti-Bolsheviks, and that was what Lenin wanted. However, there are many other reasons why the Bolsheviks did remain in power. As soon as Lenin came into power in October 1917, there were a few things that he had to do. Firstly, he held a national election, which did not give him good results. In this Constituent Assembly, formed on 5 Jan 1918, the Bolsheviks only won 168 seats out of a possible 700, whereas the Social Revolutionaries won around 370. ...read more.

The Cheka's sole job was to kill anyone who defied Lenin and the Bolsheviks. As I have said, they killed on average 1,000 people every month. All through this time, Russia was ruled through terror, and the thought of what would happen to you if you tried to revolt. Also, the Bolshevik government nationalized every possible thing; houses, land, factories. Even private businesses were banned. They had complete control with the excellent army, led by Trotsky, and the gruesome Cheka, who everyone feared. As the months went by, the anti-Bolshevik protestors got more and more angry with the Red Army and the Cheka, and the dictatorship that had been formed. As a group called the Whites, they decided to rebel against the Bolsheviks. This started in the middle of 1918, and finished in January 1921. The whites consisted of the SRs, the Mensheviks, the Tsarists, the capitalists, and the Czechs. At one time the Bolsheviks were fighting on 17 different fronts, but had destroyed any threat by 1921. There were many reasons why, and how, they did it. The first reason was that the Bolsheviks had the huge advantage of the Trans-Siberian railway. ...read more.

This War Communism was good for winning the Civil War, but Lenin failed to realise what long-term affects it would have on the Bolsheviks and their government. It made them win the war, but now hardly any of the peasants liked him any more, and the workers were very upset with the force of the discipline. The severity of this War Communism even led to the Kronstadt mutiny in February 1921, just after the Civil War had been won. These sailors were once very keen Bolshevik supporters, and so their mutinying was a big surprise. After carrying out the October Revolution, the working classes hoped for freedom. But the result has been greater slavery. The bayonets, bullets and harsh commands of the Cheka - these are what the working man of Soviet Russia has won...Here in Kronstadt we are making a third revolution which will free the workers and the Soviets from the Commnuists. Although the Red Army soon saw to this revolt, Lenin immediately changed his polices from War Communism to NEP. As one can see from the way in which the country was being run, the main reason why the Bolsheviks retained power was because of their armed forces; the Cheka and the Red Army. The terror that both of them struck into the hearts of the Russians was astounding. ...read more.