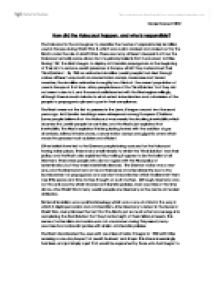 How did the Holocaust happen, and who is responsible?

How did the Holocaust happen, and who is responsible? The Holocaust is the name given to describe the murder of approximately six million Jews in Europe during World War II, which was a plan devised and carried out by the n**i's under the rule of Adolf Hitler. There are many different viewpoints of how the Holocaust actually came about, but my primary belief is that it was down to Hitler. During 1941 the n**i's began to display anti-Semitic propaganda as the beginning of their aim to remove Jewish presence in Europe, which they codenamed their 'Final Solution'. By 1945 an estimated six million Jewish people had died through various different ways such as concentration camps, massacres and forced marches; the six million estimation is roughly two thirds of the current population of Jews in Europe at that time. Many people knew of the 'Final Solution' but they did not seem to rise to it, and thousands collaborated with the n**i regime willingly, although there is much debate to what extent indoctrination and submission of the people to propaganda played a part in their compliance. The n**i's were not the first to persecute the Jews, it began around two thousand years ago. Anti-Semitic teachings were widespread among European Christians. Some people believe that the Holocaust was merely the shocking inevitability which doomed the Jewish people for centuries, and the n**i's just exploited that inevitability. The n**i's exploited this long lasting hatred with the addition of gas chambers, railway infrastructures, concentration camps and gigantic ovens which made the process much quicker and efficient. ...read more.

The children were subject to an extreme bombardment of propaganda and n**i ideologies which made the acceptance very easy. Teaching consisted of different anti-Semitic lessons such as distinguishing the difference between a Jew and a German, and the idea of the Aryan 'perfect' race was strongly re-enforced. Hitler had the Hitler Youth programme which consisted of what may be seen as a training regime for the young to become the next German army. The boys pressured each other into joining the Hitler Youth programme, and those who didn't were subject to vast torment, humiliation and segregation due to them not participating in the n**i regime. This shows on a very deep level that the German people wanted to be part of something good. The whole n**i regime, as many people have said seemed perfect at the time. Hitler had salvaged Germany from an economic low reducing unemployment vastly and providing many services from the state which would otherwise not have been available to the masses. The German people were kept constantly happy, so it seemed, and everything that Hitler and the n**i regime brought their way was simply accepted. This may be seen as an excuse for the participation of the bystanders and the willingness of the German people to participate in the n**i regime, but I truly believe that had there not been the benefits that they had received, and been lulled into a false sense of security believing that they were far better off with the regime, that the anti-Semitic views would most definitely have not been accepted and acted upon such as they were. ...read more.

It is said that many condemned Kristallnacht even at the risk of their own liberty. None of this opposition was widely documented, and the majority of reading material leads you to believe that the majority of people were in actual fact in support of the anti-Semitic policies due to a censorship and the fact that some people lived in constant fear and with the inability to speak out due to fear of oppression. In conclusion it is my firm belief that it was due to many factors and the full combination of them all, but dominantly the role that Hitler played that the Holocaust existed. I do not believe that it would have been possible for the Holocaust to have taken place without Hitler and the n**i party working together adequately in preventing the German people from rebelling against the n**i regime with a constant supply of intricate propaganda in different forms, some of which in your face, other methods much more subliminal. Ultimately Hitler played the biggest role in the persecution of the Jews as it was ultimately his aim to have a scapegoat, a reason as to why the 'great German nation' lost the First World War; the Jewish people were his window of opportunity, and he seized that with a solid foundation and position in German society by being much loved due to his characteristics and the belief held by many German people that he was actually doing a vast amount of good for the German economy and returning it to be the powerful state which it once was. ?? ?? ?? ?? Daniel Horner LVISW ...read more.