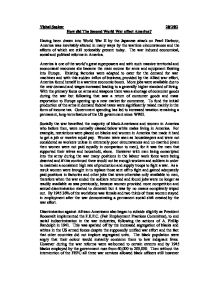 How did The Second World War affect America?

Vishal Sookur 20/2/02 How did The Second World War affect America? Having been drawn into World War II by the Japanese attack on Pearl Harbour, America was inevitably altered in many ways by the wartime circumstances and the affects of which are still noticeably present today. The war induced economical, social and political reforms in America. America is one of the world's great superpowers and with such massive territorial and economical resources she became the main source for arms and equipment flowing into Europe. Existing factories were adapted to cater for the demand for war machines and with this sudden influx of business, provided by the Allied war effort, America found herself in a wartime economic boom. More jobs were available due to the new demand and wages increased leading to a generally higher standard of living. With the primary focus on arms and weapons there was a shortage of consumer goods during the war but following that saw a return of consumer goods and mass exportation to Europe opening up a new market for commerce. ...read more.

Discrimination against African-Americans also began to subside slightly as President Roosevelt implemented the F.E.P.C. (Fair Employment Practices Committee), to end racial indiscrimination in the war industries, following the actions of A. Phillip Randolph in 1941. This was sparked off by the increased segregation of blacks and whites in the US armed forces despite the supposedly unified war effort and the fact that other countries did not implore segregated units. The black population were angry that their colour would instantly condemn them to low indignant lives. However during the war reforms were welcomed to certain extents and by 1945 blacks employed by the government rose from 60,000 to 200,000. Then without the intervention of the FEPC all three war services allowed black officers still however segregated but nevertheless improving standards between blacks and whites. It seems that the war did not have an active role in reforming the situation in America between blacks and whites but it provided a form of passive provocation. With the increased need for workers and factories many cities became popular sites for those seeking employment such as the African-Americans and poor southern farmers. ...read more.

This aimed to improve social security, provide full employment, increase the minimum wage, build more homes and secure employment equality for all races. This ambitious policy never really achieved its aims for the mostly Republican Congress largely opposed the Fair Deal due to its high expenditure and need for increased taxation. This led to Government control being reduced considerably as was introduced during the Depression and wartime. Socially America has changed considerably and s****l and racial discrimination has been tackled. Women in particular have been granted or have fought for the right to work with the fortunate circumstances of the war creating a definite social change. Also economically America has benefited for many of what were the Allied countries are still within a trading circle with the USA as its centre and looking at the more short-term benefits, America prospered with all the required arms production resting upon her factories. Politically taxes have remained high and Government power has been reduced but without the policy of Containment Eastern Europe may not have recovered with such effectiveness and America may have descended into another depression due to poor over-seas commerce. ...read more.