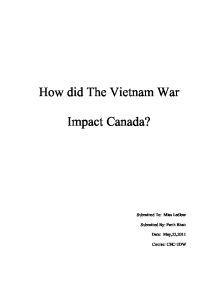 How did the Vietnam War Have an Impact on Canada

How did The Vietnam War Impact Canada? Submitted To: Miss Ledlow Submitted By: Parth Bhatt Date: May,22,2011 Course: CHC-2DW The Vietnam War was the most gruelling and unpopular war in America history. It resulted in nearly 60 000 American deaths and an estimated 2 million Vietnamese deaths.1 The war started in 1956 after Vietnam had gained its independence from France. Vietnam was temporarily divided between the north and the south. The south was anti-communist, and thus supported by the United States (US) and the North was a communist state, supported by The Union of Soviet Socialist Republics (USSR). In 1956, South Vietnam had denied to hold the unification elections. By 1958, the Viet Cong in the north had begun to attack the South Vietnamese Government. By 1966, America had employed 190,000 US troops in Vietnam. The indirect cost of the war had been 140 billion dollars while the estimated indirect costs of this war have been 900 billion dollars.The reason Canada did not go to war in Vietnam was because Canada did not adopt the Truman and Eisenhower Doctrines.2 Canada did not agree that communism must be actively opposed through foreign intervention. ...read more.

Even though many Canadian soldiers had volunteered to fight in the Vietnam War, Many citizens did not agree with the conscription policies and thus fled to Canada. The Vietnam War also affected Canada socially. Nearly 60 000 young men had come to Canada to seek refuge.6 They were known as "Draft Dodgers". "Draft-Dodgers" is a term that refers to a person who avoids the conscription policies of the nation he or she resides in by leaving the country or going into hiding. Many of these men did not want to fight for the war effort in Vietnam and hence came to Canada to seek refuge. This had affected Canada socially because many people were entering the country in a short period of time. In addition, many American men who were enlisted in the US army came to Canada to seek refuge. They were known as Deserters. These men had abandoned the US military and made their way to Canada. The men who had deserted the US army have still not been pardoned and are able to face jail time if caught within the US. An example of this was the case of Richard Allen Shields. ...read more.