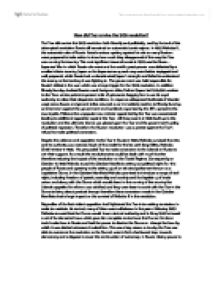 How did Tsar survive the 1905 revolution?

How did Tsar survive the 1905 revolution? The Tsar did survive the 1905 revolution both literally and politically, and by the end of the attempted revolution Russia still remained an autocratic tsarist regime. In 1905 Nicholas II, the autocratic ruler of Russia faced a serious uprising against his rule as many Russians were prepared to take action to show how much they disapproved of the way the Tsar was running the country. The most significant cause of unrest in 1905 was the Russo-Japanese War in which Russia who were one the world's great powers was defeated by a smaller inferior country, Japan as the Japanese army and navy were better equipped and well prepared, whilst Russia had underestimated Japan's strength and failed to understand the enemy or the territory it was fighting in. The government was held responsible for Russia's defeat in the war which was a large trigger for the 1905 revolution. In addition b****y Sunday shocked Russians and foreigners alike, Father Gapon led 200,000 workers to the Tsars winter palace to present a list of grievances begging him to use his royal authority to relive their desperate conditions. In response widespread Outbreak of disorder wept across Russia and general strike occurred as an immediate reaction to b****y Sunday and terrorism against the government and Landlords organised by the SR's spread to the countryside. ...read more.

Giving power to the people would result in a revolution as so many groups opposed him, so by maintain his autocratic system the Tsar was able to some extent control the revolutionaries. Although a large majority of the population opposed Tsarist Regime, there were varying extremes of opposition, and Tsar worked cleverly to temporarily please the three main opposition classes, peasantry, industrial workers and reformist middle classes. With the Liberals satisfied the rioting peasants were next targeted in an attempt to reduce opposition to the Tsar, Peter Stolypin, Chief Minister in July 1906 argued that if peasants had a higher standard of living they would be less inclined to support the revolutionary groups. He promised to progressively reduce mortgage repayments and the abandon them altogether and the immediate response to this was a drop in the number of land seizures across Russia. Stolypin also encourage peasants to buy land from their local village which had owned it since the peasants were freed from serfdom in 1861. The government provided loans to help peasants purchase land and by 1914 over two million peasants had possession of their own and. Stolypin's measures meant that there was less unrest in the factories and the mines subsequently there were fewer strikes. .................Yet Stolypin's policy was "suppression before reform", and he granted the Okhrana powers to execute those who seemed so guilty no need for trial which led to phrase Stolypin's necktie, over 4,000 were executed and 4,000 sentenced to hard labour. ...read more.

It can be said that the Tsarist system survived the revolution for a number of different reasons; however the most significant reason is that of the nature of the concessions made in the October Manifesto had a huge impact on the survival of Nicholas II in the revolution. The Tsar gained support from the Liberals after the manifesto which helped the Tsar to restore this power. Although the terms of the Mainfesto were not fully implemented and the Tsar still ensured he had control over the running of the country, he compromised to a level which the peasants, industrial workers and liberals were content. The Tsar had enough military backing to deal with the revolution; he could destroy outbreaks of resistance wherever there was opposition to the Tsarist regime. The easing of the collective resistance was down to the two chief ministers of the Tsar, Sergi Witte and Peter Stolypin, Witte being responsible for the Dumas and Stolypin for the concessions for the peasants. The lack of leadership also played considerable role in assisting the Tsarist regime, as a large percentage of the protestors were unorganised and hence disunited leading back to the question of whether a revolution actually took place. But most importantly it was the power and authority that the Tsar had over his military and his ability to meet the demands and needs of those who opposed him the most that determines up the real reasoning of the survival of Tsar Nicholas II during the 1905 revolution. ...read more.