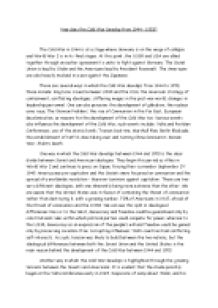 ﻿How does the Cold War Develop from 1944 ? 1953? The Cold War in 1944 is at a stage where Germany is on the verge of collapse and World War 2 is in its final stages. At this point, the USSR and USA are allied together through an earlier agreement to unite to fight against Germany. The Soviet Union is lead by Stalin and the Americans lead by President Roosevelt. The Americans are also heavily involved in a war against the Japanese. There are several ways in which the Cold War develops from 1944 to 1953, these include: long term issues between USSR and the USA; the American strategy of containment; conflicting ideologies; differing images in the post-war world; changes in leadership personnel. One can also perceive: the development of globalism; the nuclear arms race; The ?German Problem?; the rise of Communism in the Far East; European decolonisation, as reasons for the development of the Cold War too. Various events also influence the development of the Cold War, such events include: Yalta and Postdam Conferences; use of the atomic b**b; Truman Doctrine; Marshall Plan; Berlin Blockade; the establishment of NATO; Mao taking over and turning China Communist; Korean War; Stalin?s death. ...read more.

It was clear that there was tension between Stalin and Truman. The conclusion of the Conferences saw the Soviet Union gain control of over 25% of Germany plus an extra 25% of industrial equipment within other zones in the defeated nation. The development of globalism also affected the two sides. The communist takeover of China in 1949, Korean War of 1950-3 and Vietnam turned many of the world?s eyes towards Asia. All areas were being taken over by communism, somewhat in a very convenient area for the Soviet Union to have a sort of buffer zone, between itself and non-communist countries. America got involved through the strategy of containing communism and refusing its expansion any further than the areas it was currently being adhered to by governments. During some of the American ?missions? to achieve this containment of communism, it is reported that the Soviets also provided support for those communist sides in various forms - material, financial and even military on some occasions. On the other hand, there was also the existence of the process of European decolonisation ? this provided a range of opportunities for both nations to exert their influence of newly-independent states, within Africa and the Middle-East. ...read more.

USA had greater financial support for their weaponry projects and as such infuriated Stalin. However, the majority of these weapons were never actually put to use and were all a waste of money, in the eyes of many. The Arms Race created greater tension between the two Superpowers. By the end of 1955, both USSR and the USA possessed a hydrogen b**b. The USSR managed to catch up with their American counterparts, and the fear that they might actually overtake the USA was raised across the States, in which their only solution was to stay ahead of the Russians and continue to increase their arms. Without any such dialogue between the two sides, tensions during the stated period just continued to escalate. As such, highlights how the Cold War developed during 1944 to 1953. Overall, the Cold War develops through the increase in tension between the USSR and the USA. It leads to an escalation in fighting, directly or indirectly, between the two sides, as well as non-verbal battles taking place at the two Conferences (Potsdam and Yalta), on top of the famous ?Arms Race.? It is a negative and unnecessary development of a War which didn?t need to take place and could have been settled quite easily using forms other than war. ...read more.