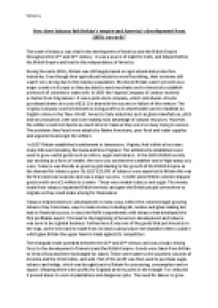 How does tobacco link Britains empire and Americas development from 1600s onwards?

ï»¿Selina Ly How does tobacco link Britain’s empire and America’s development from 1600s onwards? The trade of tobacco was vital in the development of America and the British Empire throughout the 17th and 18th century. It was a source of trade for both, and helped further the British Empire and lead to the independence of America. During the early 1600s, Britain was still largely based on agricultural and production industries. Even though their agricultural industries were flourishing, their economy still wasn’t very strong due to the massive population. Moreover Britain wasn’t yet seen as a major country in Europe so they decided to send merchants out to America to establish a network of colonies to trade with. In 1606 the Virginia Company of London received a charter from King James I. It was a joint-stock company, which sold shares. All who purchased shares at a cost of £12 10s shared in the success or failure of the venture. ...read more.

This lead to the beginning of America?s development and tobacco was soon to be a global business. Furthermore it was one of the goods that put America on the map, as the new land to trade from; its land could produce merchandise others couldn?t which gave Britain the upper hand in trade against its competitors. The triangular trade operated between the 16th and 19th century and was a major driving force to the development of America and the British Empire. Goods were taken from Britain to West Africa and there exchanged for slaves. These were taken to the southern colonies of America and the West Indies, and sold. Part of the profit was then used to purchase sugar, tobacco and indigo, which was brought back to Britain for processing, consumption and re-export. Meaning there were profits for England at every point in the triangle. For centuries it proved slaves to work at plantations and dangerous jobs. ...read more.

If it wasn?t for John Rolfe?s experiments in tobacco there wouldn?t be this multibillion pound industry in tobacco in Britain which is still around today. In addition it gave the British working men an opportunity to make a living for themselves so they could provide for their families as it opened up a lot of jobs on tobacco plantations. Also through expanding the slave trade more plantation owners started to buy slaves to do their labour as they would work for long hours and get paid less leading to the growth of America and Britain?s economy as there would be an increase of production in tobacco for the fraction of the cost. Britain was receiving more goods to sell and America was producing more goods to trade and by increasing Britain?s land it gave them status and soon became one of the strongest countries in Europe. Overall the main link between Tobacco and the British Empire and Americas development is that it was an industry with financial success it developed the British economy and gave them more territory which allowed Americans to have and better quality of life. ...read more.