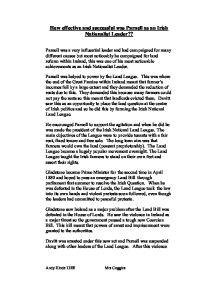 How effective and successful was Parnell as an Irish Nationalist Leader??

How effective and successful was Parnell as an Irish Nationalist Leader?? Parnell was a very influential leader and had campaigned for many different causes but most noticeably he campaigned for land reform within Ireland, this was one of his most noticeable achievements as an Irish Nationalist Leader. Parnell was helped to power by the Land League. This was where the end of the Great Famine within Ireland meant that farmer's incomes fell by a large extent and they demanded the reduction of rents due to this. They demanded this because many farmers could not pay the rents so this meant that landlords evicted them. Davitt saw this as an opportunity to place the land question at the centre of Irish politics and so he did this by forming the Irish National Land League. He encouraged Parnell to support the agitation and when he did he was made the president of the Irish National Land League. The main objectives of the League were to provide tenants with a fair rent, fixed tenure and free sale. The long term aim was that farmers would own the land (peasant proprietorship). ...read more.

These demands were to provide tenants with a fair rent, fixed tenure and free sale. All of these were granted within the Act. The passing of the Second Land Act left Parnell with a real problem because as the Irish Leader he had to keep the support of the militants and the moderates, both within and outside his party. If he supported the Second Land Act he would be denounced by the militants for currying favour with the liberals and abandoning struggle for fundamental land reform. On the other hand if he opposed it he might lose the support of the moderates and antagonise those tenants who saw forcible benefits of the Act. Instead Parnell took his time and criticised aspects of the Act without actually rejecting it. So he did not actually upset either the moderates or militants. Parnell was arrested which actually led to better relations between the Irish Leaders and British Government. The arrest saw the violence within Ireland worsen and going out of control and the British Government could not control the situation. The government realised that the only person who could help solve the violence within Ireland was Parnell. ...read more.

By 1884, Parnell's authority was so secure that he was able to impose a party pledge. He managed to unite the party into a single unit under his own command. Overall Parnell was very effective as an Irish Nationalist Leader. He was so successful and effective that he is referred to as the 'uncrowned King of Ireland'. He was very effective through the campaign for land reform due to the Irish National Land League being formed and himself being appointed as the president of this organisation. Through this organisation he was able to push the idea of land reform through and achieve the main aims of the Irish National Land League, which were to provide tenants with a fair rent, fixed tenure and free sale. He achieved this very successfully and is mostly known for this. He tried to get Home Rule for Ireland but was not as effective at achieving this due to his private life interfering, but he left the grounds for other people to carry on the fight for Home Rule. All in all he was a very effective Nationalist leader because he managed to achieve what he set out to do, even though he personally didn't get Home Rule he left the grounds for someone else to do so. Andy Hinde 13EE Mrs Coggins ...read more.