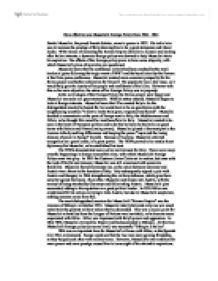 How effective was Mussolini's Foreign Policy from 1922- 1945 Benito Mussolini, the proud Fascist dictator, came to power in 1922. His initial aim was to increase the prestige of Italy showing him to be a great statesman and liberal leader. With visions of recreating the Roman Empire (familiar to Caesar) and looking after Italian interests, a dynamic foreign policy was devised to help Mussolini attain his aspiration. The effects of the Foreign policy prove to have some disparity, with which Mussolini's plans of operation are questioned. Mussolini knew that the confidence in Italy had been crushed by the small territorial gains following the tragic event of WW1 and the humiliation by the Powers at the Paris peace conference. Mussolini wanted more economic prosperity for his Italian people and further admiration for himself. His popularity was a key issue, as it would help gain the loyalty of his people and confidence of his allies. However with this as his main objective, the status of his Foreign Policy was in jeopardy. ...read more.

Mussolini's plan succeeded, adding to his reputation as a good political leader. In 1935 Hitler was condemned for his actions in trying to take Austria, but due to Mussolini's scepticism, nothing concrete came from this. The most distinguished occasion for Mussolini's "Roman Empire" was the invasion of Ethiopia in October 1935. Mussolini wholly believed only one war could make Italy the greatest military nation that he demanded. This was a crucial point for Mussolini as hostility from the League of Nations was inevitable, as he became more acquainted with Hitler. Hitler was impressed with Italy's power and aggression. In May 1936, Mussolini claimed his Empire and had succeeded in Ethiopia. At this time Mussolini's Foreign policy (on some level) was successful "Ethiopia is Italian". 1936 was an important time for Mussolini's alliance with Hitler, as the Spanish Civil War commenced. Europe could see that the two men were gaining friendship, as they helped each other with military arms. However, Mussolini's over ambition for more power and more prestige caused him to loose sight of his attainable aspirations. ...read more.

Following many downfalls for the Italian army in 1943 the King was able to arrest Mussolini and take away his command. Mussolini's involvement of taking Foreign Policy into War showed his weakness and overrule by Hitler. His relationship with Hitler proved to be costly, as he did not have much choice about Foreign Policy, loosing his popularity that was of utmost importance to him. Mussolini had to rely on Germany for protection, thus got dragged into conflicts that Hitler sought after. The Italian military was of inadequate condition, due to the economic suffering from defeats. Mussolini's Foreign Policy has proved that his initial ambition to be popular failed, mainly due to the Pact of Steel. Mussolini did not foresee his downfall with his over ambitious aims in War. Mussolini disregarded the Italian people, as his ambitions surpassed his own capabilities; always wanting more power. He was later branded as a tyrant, with the vicious actions of Hitler that he naively stood by. Italy gradually became more dilapidated and the dreams of a great empire were lost. Mussolini failed his personal aims and ambition for his country, leaving his Foreign Policy to be disgraced. ...read more.