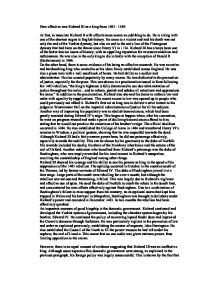 How effective was Richard III as a king from 1483 - 1485 At first, to associate Richard II with effectiveness seems an odd thing to do. He is a king with one of the shortest reigns in English history. He came to a violent end and his death was not only the end of the Yorkist dynasty, but also an end to the male line of the Plantagenet dynasty that had been on the throne since Henry VI in 1154. Richard III has always been one of the better-known losers of history, with an appalling reputation for excessive ambition and ruthlessness. He was also in the only king to die in battle with the exception of Harold II (Godwinsson) in 1066. On the other hand, there is some evidence of his being an effective monarch. He was an active and hardworking king who wanted to se his ideas firmly established across England. He was also a pious man with a well-used book of hours. He had ability as a soldier and administrator. He also courted popularity by many means. He was dedicated to the promotion of justice, especially for the poor. ...read more.

He was frequently accused of wasting the surplus gained in his predecessor's reign, although Edward's military expenses, his funeral and Richard's own coronation, had considerably reduced it. By 1485 it was necessary for him to request loans from his greater subjects, which were largely not granted and deeply resented. There is also another side to the argument concerning the 1483 rebellion. Richard's speedy reaction to the rebellion meant that a lot of the danger was reduced; however it did continue to have a detrimental effect on his authority and power-base throughout his reign. Many of the rebel leaders had escaped and crossed the channel to join Henry Tudor in Brittany forming a court in exile. This turned Henry Tudor into a more serious threat and lost Richard a great deal of support. The rebellion also signified the failure to project himself as Edward's natural successor due to the high number of his brother's servants who rebelled. Therefore he attempted to impose his rule upon the southern subjects by putting members of his northern retinue in positions of power in the South. ...read more.

Although I have explained previously in this essay many ways in which Richard III attempted to win popularity, none seemed to work. The methods employed by Richard, when other kings in history had used them did succeed in gaining support, so it was not due to Richard's own effectiveness or ineffectiveness. Again the opposition towards him appears to have been based on the events of 1483 where his actions were interpreted as desperate, ruthless and hypocritical. It was not only his supposed murder of his nephews that caused resentment, people in the City of London were also against his murder of Lord Hastings during his time as protector, and uproar was only prevented through the use of Richard's retinue. Overall I believe that Richard III was ineffective as a monarch between 1483 and 1485. However, this is not wholly because of his individual character, but mainly the events and singularly ambitious nature of his usurpation that he could not conquer by any means. As A.R. Myers said in England and the Late Middle Ages "Had he come to the throne in the normal way, his ability...might have given him a long and successful reign. As it was...[his] qualities were not enough to overcome the formidable hostility to him." ...read more.