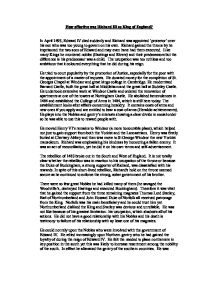 How effective was Richard III as King of England?

How effective was Richard III as King of England? In April 1493, Edward IV died suddenly and Richard was appointed 'protector' over his son who was too young to govern on his own. Richard gained the throne by he imprisoned the two sons of Edward and may even have had them executed. Like many Kings he murdered nobles (Hastings and Rivers) and their predecessors but the difference is his predecessor was a child. The usurpation was too ruthless and too ambitious that it coloured everything that he did during his reign. He tried to court popularity by the promotion of Justice, especially for the poor with the appointment of a master of requests. He donated money for the completion of St. Georges Chapel at Windsor and great kings college in Cambridge. He modernized Barnard Castle, built the great hall at Middleham and the great hall at Sudeley Castle. He undertook extensive work at Windsor Castle and ordered the renovation of apartments at one of the towers at Nottingham Castle. He abolished benevolences in 1484 and established the College of Arms in 1484, which is still here today. The establishment looks after affairs concerning heraldry. It contains coats of arms and new ones if you apply and are entitled to bear a coat of arms (Heraldic achievements). ...read more.

He felt the needed to place northerners in key position in the south yet this was likely to increase resentment among the nobility of the south. In effect he alienated the gentry of the southern countries. He was innovate as he didn't entrust the North of England to a powerful magnate instead he chose to install a council of North which would be a branch of the Royal council. He seems to be a hypocrite who contradicted himself. He was believed to have killed his nephews to get into power (without care of the law) but nevertheless appears to have genuinely wished to spread the benefits of the law to all his subjects. He even accuses his god-fearing mother of adultery for his own political ends. There are to sides to him the concerned monarch and the ruthless usurper. His policies were almost identical to Edwards. He revived the chamber finance. He granted out the forfeited lands to supports on the basis that he had annual rent from the land. His increased expenditure and growing financial peaked in 1485 and he had request loans from his greater subjects. Commissioners were sent out to the counties with letters requesting specific sums. ...read more.

When he disregarded the law and arrested and executed River, Grey Vaughan and Hastings. Showed little respect for the law when granting away the land of rebels before they had been attainted by the act of Parliament. The most notorious act was the killing of Edward IV's sons there is no proof but there is motive. His reliance upon his Northern supporters shows the narrowness of his power-base Some historians have felt that Richard III's personality remains an enigma. It is best to have as long a reign as possible to be most effective yet he had an extremely short reign lasting only two years and two months. He was a skilful tactician more hardworking than Edward and he tried many different things to try and court popularity. His assumption of the crown, however, was challenged immediately from several sides. His two-year reign consisted entirely of fighting rebellions, including an early, indirect rebellion to put Henry Tudor on the throne. When this rebellion failed, Henry Tudor took matters into his own hands and directly confronted Richard. Henry had only the most tenuous claim to the throne and the Tudor monarchs would spend the next hundred years propagandising that tenuous claim. The last fight of this rebellion, at Bosworth in 1485, resulted in the death of Richard. A new usurper, Henry Tudor took the throne as Henry VII just as Europe was entering the modern period. ...read more.