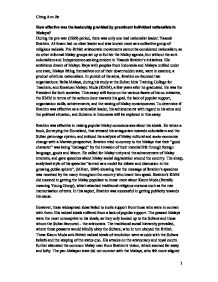 How effective was the leadership provided by prominent individual nationalists in Malaya?

How effective was the leadership provided by prominent individual nationalists in Malaya? During the pre-war (1939) period, there was only one real nationalist leader: Yaacob Ibrahim. Al-Imam had no clear leader and was known more as a collective group of religious radicals. Pro-British aristocratic movements cannot be considered nationalism, as do other informal Malay groups set up to further the Malay agenda, but without the anti-colonialism and Independence-seeking evident in Yaacob Ibrahim's initiatives. His ambitious dream of Melayu Raya with peoples from Indonesia and Malaya unified under one state, Malays lifting themselves out of their downtrodden state, were in essence, a product of ethnic nationalism. In pursuit of his aims, Ibrahim co-founded two organisations: Belia Malaya, during his study at the Sultan Idris Training College for Teachers, and Kesatuan Melayu Muda (KMM), a few years after he graduated. He was the President for both societies. This essay will focus on the various facets of his co-initiative, the KMM in terms of the actions done towards his goal, the lack of popular support, organisation skills, achievements, and the raising of Malay consciousness. To determine if Ibrahim was effective as a nationalist leader, his achievements with regard to his aims and the political situation, and Sukarno in Indonesia will be explored in this essay. Ibrahim was effective in raising popular Malay consciousness about his ideals. He wrote a book, Surveying the Homeland, that stressed his antagonism towards colonialism and the Sultan patronage system, and imbued his analysis of Malay cultural and socio-economic change with a Marxist perspective. ...read more.

Ibrahim was ineffective in leading and uniting the members of KMM. The actions of the KMM in pursuit of its goals under the leadership of Ibrahim were also less than satisfactory. In 1938, the KMM launched an anti-British newspaper and publication propaganda attack on the government's policies which neglected Malay welfare, and on the Malay aristocrats and bureaucrats, based on the policy of "non-cooperation", inspired by Indonesia's PKI. This, however, was more of just empty, exhortatory words published in popular media which failed to translate into any real political action by the members of the KMM. If anything, it served to further alienate the ordinary Malay from the KMM ideals, though widespread publicity was achieved. Towards the end of 1939, the KMM held its first annual general meeting, meant to gain publicity and support for their ideals. Little aristocratic support was gained. On the whole, the anger towards the colonial powers and traditional elite was vented mostly in private (Roff, 1994) during these closed door discussion sessions about the future of the Malay race. There seemed to have been little political action, such as strikes against the government and political campaigning to the populace. Ibrahim was deficient in getting the members of the KMM to do larger things. Lastly, the achievements of Ibrahim Yaacob's initiatives were virtually zero. He failed to make an impact on his target audience, the people whose mindsets of backwardness and state provincialism he sought to change. The prestige of the Malay rulers and the aristocrats were untouched, and it would probably seem to the average Malay peasant, at ...read more.

This showed a lack of adaptability, proof of Ibrahim's ineffectiveness as a nationalist leader looking for support. To draw comparison of Ibrahim to Sukarno, even though Sukarno was advantaged in that there was widespread Malay resentment against the Dutch colonial powers in Indonesia, and in Malaya where the Malays were generally acquiescent to the status quo, like Sukarno, Ibrahim could have come up with similar peasant shows of wayang kulit (or similar traditions) to introduce to them pan-Malayan and other concepts. The fact remains that Ibrahim simply refused to involve the common Malay man in his efforts to expunge the British from Malaya, preferring to antagonise the British with propagandistic efforts instead, with very little popular support. This seeming apathy and lack of action towards his lack of popular support that meant that the British would not be easily coerced to give up Malaya proved to be an ineffective way of trying to achieve progress for the Malays and the pan-Malaya ideal. After balancing the difficulties that Ibrahim Yaacob faced as a radical nationalist leader, with Ibrahim's leadership style in comparison to Sukarno from Indonesia, in conclusion, he was ineffective as a nationalist leader as he failed to adapt to the situation where the Malay man was unreceptive to his ideas, in providing real alternatives to the British rule, and in his organisational skills, leading to the real failure of his nationalist initiative, the KMM in attaining his goals in the face of the unfavourable political situation. Comments: Good. A consistently relevant answer which focuses well on Ibrahim Yacoob's weaknesses. You might want to say rather more about his socialism. ...read more.