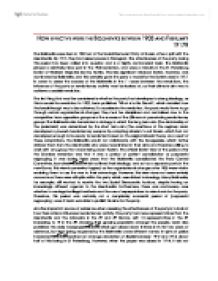 How effective were the Bolsheviks between 1903 and February 1917?

HOW EFFECTIVE WERE THE BOLSHEVIKS BETWEEN 1903 AND FEBRUARY 1917? The Bolsheviks were born in 1903 out of the Social Democrat Party of Russia, after a split with the Mensheviks. By 1917, they had seized power in Petrograd. The effectiveness of the party during this period has been called into question and is a highly controversial topic. The Bolsheviks played a relatively minor part in the 1905 revolution, and were a minority in the St. Petersburg Soviet of Workers' Deputies led by Trotsky. The less significant Moscow Soviet, however, was dominated by Bolsheviks, and this certainly gave the party a model for the Soviets used in 1917. In order to assess the success of the Bolsheviks in the 11 years between the revolutions, the influence of the party on revolutionary activity must be looked at, as their ultimate aim was to achieve a socialist revolution. The first thing that must be considered is whether the party had developed a strong ideology, as this is crucial for revolution. ...read more.

Furthermore, there was controversy over whether to use legal or illegal methods and the use of expropriations to raise funds for the party. Therefore, this period was certainly not a completely successful period of 'purposeful regrouping', even if Lenin was able to publish his aims for the party. Another important source of evidence when assessing the effectiveness of the party is to look at how their actions influenced revolutionary activity. The party had more representatives than the Mensheviks and the Labourists in the 3rd and 4th Dumas, with 15 representatives in the 3rd increasing to 19 in the 4th, showing their growing popularity amongst the people. Lenin also published the daily newspaper, Pravda, which got closed down 8 times in its first two years of existence, but kept being reopened by the Bolsheviks under different names. In spite of police harassment, Pravda reached an average circulation of 40,000 between 1912 and 1914, about half of this being in St Petersburg. However, when the paper was closed in 1914, it did not reappear until after the February revolution. ...read more.

The Bolsheviks also allegedly received money from the Germans during the war, which was highly unpopular among Russians, and Lenin was accused of being a German spy. In the years between 1907 and 1914, most of the Bolshevik leaders were in foreign exile, making their work very difficult for Lenin and his comrades. Prospects for revolution seemed poor, there were problems with communication and funds were low. Before the war, there were already impending signs of revolution - but not of Bolshevik revolution. The party wanted to take full advantage of the First World War, which would accelerate the process of weakening the Tsarist structure so much that it would eventually give way to pressure from below. However, the Bolsheviks did not contribute much to this as other revolutionary groups were also opposing the war, and the Menshevik newspaper, Golos, blamed the conflict on the imperialism of the ruling classes, which is a similar line to the one that Lenin took. While in exile in Switzerland, Lenin was rarely able to give effective direction to his organisations in Russia. He refused to cooperate with the other revolutionary groups and insisted on maintaining a separate Bolshevik approach. The ?? ?? ?? ?? ...read more.