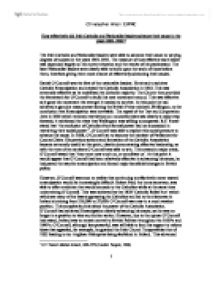 How effectively did Irish Catholic and Nationalist leaders advance their cause in the years 1801-1921?

How effectively did Irish Catholic and Nationalist leaders advance their cause in the years 1801-1921? The Irish Catholic and Nationalist leaders were able to advance their cause to varying degrees of success in the years 1801-1921. The measure of how effective each leader was depended largely on his current situation and the results of his predecessor. The later Nationalist leaders were clearly able to build upon the work of those before them, therefore giving them more chance of effectively advancing their causes. Daniel O'Connell was the first of the nationalist leaders. He aimed to achieve Catholic Emancipation and created the Catholic Association in 1823. This was extremely effective as he mobilized the Catholic majority. The Church then provided the framework for O'Connell to build his new movement around. This was effective as it gave his movement the strength it needed to survive. At this point he had achieved a genuine mass protest forcing the British Prime minister, Wellington, to the conclusion that Emancipation was inevitable. The repeal of the Test and Corporation Acts in 1828 which removed restrictions on nonconformists was clearly a major step forward; it reinforced the view that Wellington was willing to cooperate. R.F. Foster stated that 'the exclusion of Catholics from formal power had not succeeded in restricting their social power'1, O'Connell was able to exploit this social pressure to advance his cause. In 1828, O'Connell ran to become the member of Parliament for County Claire. His previous actions and formation of the Catholic Association became extremely useful at this point, clearly demonstrating effective leadership, as with the vote of its members O'Connell was able to win. This created a major crisis, O'Connell stated that 'they must now crush us, or conciliate us'. At this point it would appear that O'Connell had been relatively effective in advancing his cause, he had paved the way for emancipation and forced major beneficial changes in British policy. ...read more.

This was a step forward for the Parnell's cause, it entitled tenants to fair rent, fixity of tenure and a right of free sale of their tenure. However, it did come close to failure when landlords insisted that their rent be paid. This came close to undermining all that Parnell had achieved. He was arrested in October 1881. In a letter to Katharine O'Shea following his arrest he admitted 'the movement is breaking fast, and all will be quiet in a few months, when I shall be released'.4 This would suggest that Parnell knew that his movement was not advancing effectively. However, he took action and still achieved the Arrears Act, which became known as the 'Kilmainham Treaty'. The fact that Parnell had been imprisoned at the time, and had still negotiated the deal with Gladstone suggests that he was effectively advancing his cause. Parnell then aimed to achieve 'Home Rule', bringing the Irish parliament back to Dublin. In December 1885 Gladstone announced his support for 'Home Rule' leading to a disaster for Ireland. The Conservatives adopted an oppositional stance and the Liberal Party was split. Parnell failed to deliver 'Home Rule' and was destroyed by a divorce scandal. Unable to recover from the situation he died in 1891. It would appear that Parnell had been predominantly effective in advancing his cause, for example, the signing of the 'Kilmainham Treaty' was a success, even more so considering it was orchestrated from within prison. However, failure to deliver 'Home Rule' demonstrates that there were times when Parnell was unable to advance his cause effectively. Following the Parnell came the formation of the Gaelic League in 1893. The effectiveness of the Gaelic movement is questionable; it could be argued that the League had a profound impact on later Nationalist leaders. For example, Pearse, Collins and de Valera all claimed to have been inspired by its ideas. ...read more.

The Anglo-Irish Treaty was signed in 1921 by Collins which gave Ireland Dominion status. This was bitterly disputed by many Nationalists, but Collins stated that it was the best that could be done. Collins had achieved nominal independence for Ireland; it could now refer to itself as the Irish Free State. It can therefore be stated that Collins had advanced his cause effectively, as he had come close to achieving the Irish Nationalist rule. In conclusion, it would seem that the nationalist and Catholic leaders achieved varying success in achieving their aims. Many, such as O'Connell and Parnell made huge advances - achieving not only their own causes but also paving the way for later leaders. Some groups, such as the Fenian movement were less successful and failed to achieve what they set out to do. John Redmond was undermined by violence, turning public opinion against his cause; this prevented him from making any major progress. Collins did achieve partial success, but did not actually achieve a Nationalist Ireland, but instead Dominion status and a partitioned Ireland. 1 R.F. Foster's Modern Ireland, 1600-1972 (London: Penguin, 1988) 2 Patrick O'Farrell's 'England and Ireland since 1800' (London: Oxford University Press, 1975) 3 'The Great Hunger' Cecil Woodham-Smith (1962) 4 A letter from Charles Parnell to Katharine O'Shea on the morning of his arrest, 13 October 1881 5 Address known as 'The Necessity for De-Anglicising Ireland' given by Douglas Hyde (25 November 1892) 6 Extracts from the Solemn League and Covenant (September 1912) 7 Extracts from the Solemn League and Covenant (September 1912) 8 From a pamphlet entitled 'The Coming Revolution' by Patrick Pearce (November 1913) 9 John Dillon's speech in Parliament (11 May 1916) 10 Memoirs of the Countess of Fingall (Seventy Years Young, Dublin: Lilliput Press, 1991) 11 Memoirs of the Countess of Fingall (Seventy Years Young, Dublin: Lilliput Press, 1991) 12 A description of Collins addressing a meeting of Sinn Fein in February 1919 13 From and address from a Black and Tan commander Lt. Col. Smyth to his men, 17 June 1920 ?? ?? ?? ?? Christopher Alton 13PMC 1 ...read more.