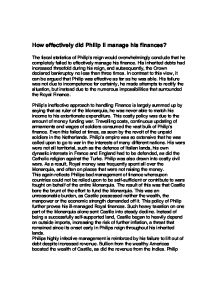 How effectively did Philip II manage his finances?

How effectively did Philip II manage his finances? The fiscal statistics of Philip's reign would overwhelmingly conclude that he completely failed to effectively manage his finance. His inherited debts had increased threefold during his reign, and subsequently, the Crown declared bankruptcy no less than three times. In contrast to this view, it can be argued that Philip was effective as far as he was able. His failure was not due to incompetence for certainly, he made attempts to rectify the situation, but instead due to the numerous impossibilities that surrounded the Royal Finance. Philip's ineffective approach to handling Finance is largely summed up by saying that as ruler of the Monarquia, he was never able to match his income to his extortionate expenditure. This costly policy was due to the amount of money funding war. Travelling costs, continuous updating of armaments and wages of soldiers consumed the vast bulk of Philip's finance. Even this failed at times, as seen by the revolt of the unpaid soldiers in the Netherlands. Philip's empire was so extensive that he was called upon to go to war in the interests of many different nations. ...read more.

The 36 million Ducat debts that he inherited became �68 million Ducats by the end of his reign. The diabolical state of finance was not helped by the grandiose lifestyle of the King, who maintained the mentality of the ever-important prestige display. Moreover, Philip failed to be interested in Fiscal matters, and appeared to launch plans without taking the care to cost them through. Philip seemed to have greatly failed to be efficient on handling Royal finances. However, another view could argue that Philip made the best of a bad situation. For example, he managed to re-stabilise finance after the bankruptcies. Philip was initially dealt a bad hand by inheriting both a great debt and an extended empire from his father. This would entail a need for further finance, and Philip was immediately faced to raise this form a minus figure. Moreover, the increased lands now labelled as Philip's Monarquia, would involve extended foreign war involvement, and in turn, war expenditure. The need to go to war in the interests of his inherited lands was forced upon the new ruler. ...read more.

Evidence of Philips effective policies involving finance are reflected in the decrease of household expenditure during his reign. This shows that Philip has recognised the responsibility he had to improve the state of Royal finance. This could be considered impressive due to the mentality that Philip, and other Kings of this period, were fixed in. This was the age in which religion and national prestige far outweighed the necessity to deal with Finance. It can convincingly be argued then, that Philip was a highly overworked King who made the best of a bad situation. He attempted, with limited personal time and resources, to manage the situation, and did so with reasonable success. Certainly he was effective in the matters which he did change, such as taxation. It can be said that financial failure was inevitable and that is was impossible for Philip to effectively succeed in regaining control of royal finance. I support this view as a far more realistic and pragmatic one than the opposing view which argues that Philip failed to deal with the underlying problems of Royal Finance. Instead he ignored opportunities to effectively reform finance so that bankruptcy was caused several times, indicated ultimately his failure to manage finance. ...read more.