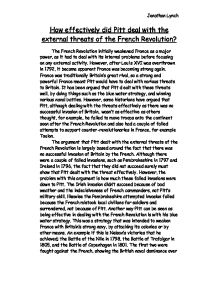 How effectively did Pitt deal with the external threats of the French Revolution?

How effectively did Pitt deal with the external threats of the French Revolution? The French Revolution initially weakened France as a major power, as it had to deal with its internal problems before focusing on any external activity. However, after Louis XVI was overthrown in 1792, it became apparent France was becoming strong again. France was traditionally Britain's great rival, so a strong and powerful France meant Pitt would have to deal with various threats to Britain. It has been argued that Pitt dealt with these threats well, by doing things such as the blue water strategy, and winning various naval battles. However, some historians have argued that Pitt, although dealing with the threats effectively as there was no successful invasion of Britain, wasn't as effective as others thought, for example, he failed to move troops onto the continent soon after the French Revolution and also had a couple of failed attempts to support counter-revolutionaries in France, for example Toulon. The argument that Pitt dealt with the external threats of the French Revolution is largely based around the fact that there was no successful invasion of Britain by the French. ...read more.

Another problem with this argument is how much the victories of Britain's navy can be credited as an achievement by Pitt, instead of an achievement of the admiral at the time. For example, the victory in the Battle of Trafalgar, in which 22 French ships were destroyed, but not one British ship perished, was mainly due to Lord Nelson's naval tactics and execution, rather than Pitt's blue-water strategy. The final way I think Pitt can be seemed to be effective was in his alliances. Pitt offered various countries, such as Prussia, subsidies. Pitt was able to pay these because of National Revival in Britain. These subsidies meant that the longer the country was allied to Britain, the more they would get paid. Schemes like this from Pitt enabled alliances to be formed, for example the Triple Alliance with Prussia and the United Provinces in 1788. These alliances allowed Britain increased security in Europe, and also gave it trade benefits. However, these alliances were not to last, because of various discrepancies. ...read more.

Pitt was sure that the war would be a short one, and based all his financial dispositions from 1793 to 1796 on this assumption. As Evans points out, "Much national wealth was wasted by inadequate early financing of a war which turned out to be very different to the one originally envisaged." Pitt also assumed that France would not be capable opponents in war and would be easily defeated, and therefore he didn't appreciate the need for more military and naval training for Britain. This question makes you consider if there were any factors that dealt with the external threats not involving Pitt. This can be linked back to the preceding part of the essay where I mentioned that the failed invasions of Britain and Ireland were down to other factors. Also, something else worth mentioning is Pitt couldn't control the actions of his allies, so the fact that they wouldn't support him fully in his fighting of France was not really his fault. To conclude, I think that, while Pitt was obviously effective in dealing with the external threats of the French Revolution, he wasn't as effective as he could have been. Jonathan Lynch ...read more.