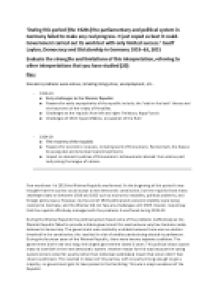 How effectively did Weimar governments deal with the problems faced between 1919-1929?

﻿?During this period [the 1920s] the parliamentary and political system in Germany failed to make any real progress. It just coped as best it could. Government carried out its work but with only limited success.? Geoff Layton, Democracy and Dictatorship in Germany 1919?63, 2015 Evaluate the strengths and limitations of this interpretation, referring to other interpretations that you have studied (20) Plan: Economic problems were serious, including rising prices, unemployment, etc? * 1919-23: * Early challenges to the Weimar Republic * Reasons for early unpopularity of the republic include, the ?stab in the back? theory and the key terms of the treaty of Versailles. * Challenges to the republic from left and right: Freikorps, Kapp Putsch. * Challenges of 1923: hyperinflation, occupation of the Ruhr * 1924-29 * The recovery of the republic * Reasons for economic recovery, including work of Stresemann, Rentenmark, the Dawes & young plan and American loans/investments. * Impact on domestic policies of Stresemann?s achievements abroad: the Locarno pact and joining the league of nations. Post world war I in 1919 the Weimar Republic was formed. At the beginning of this period it was thought that the country could accept a new democratic constitution, but the republic faced many challenges early on between 1919 and 1923 such as economic instability, political problems, and foreign policy issues. ...read more.

The occupation of the Ruhr did the French little good, but it did cripple Germany. The German government urges passive resistance this led to workers going on strike, there was even some sabotage. The occupation of the Ruhr increased Germany’s debts, unemployment and the shortage of goods. This was a big problem for the republic as it meant that Germany was in debt of £6.6 billion and the reparations couldn’t be paid. Furthermore, the economic recovery between 1923-1929 was fragile, this resulted in collapse following the Wall St Crash in 1929. As Stresemann admitted, “Germany is dancing on a volcano. If the short-term credits are called in, a large section of our economy would collapse”. Even before 1929 there was a crisis in agriculture, rising unemployment and a balance of payments deficit. This was bad for the economy and the republic as if there was another crisis Germany would completely collapse. However, the republic managed to overcome hyperinflation, this happened when Stresemann was appointed foreign minister and chancellor of Weimar Germany. Stresemann stabilised Germany by solving hyperinflation to do this, he introduced a new currency, the Rentenmark, and stopped printing money. ...read more.

6 million Germans voted to reject the Young plan in the ?Liberty Law? of 1929. This was seen as a problem as the republic weren?t happy that they still had to pay reparations even though, Stresemann had reduced them. This was seen as a problem however, in the referendum only 13.8% voted against the Young plan. This shows that it wasn?t a big problem for the Weimar Republic to deal with. Overall, taking consideration of the above points I think that the Weimar Republic quite effectively dealt with the problems between 1919-1929 however there were a few difficulties during the Weimar Republic. Between 1919-1923 the problems Germany faced were major and on the verge of collapse socially and economically. However, this crisis was followed by a period of relative stability and success. The period between 1924-1929 was a time when the Weimar economy recovered. Germany?s stability period was only stable when Stresemann became chancellor. They restored their international relations with three events: the Locarno Treaties, League of Nations, and the Kellogg-Briand Pact. These events meant that Germany was accepted into the international community to avoid another destructive war. So, in conclusion the Weimar Republic wasn?t dealt with successfully at the beginning but towards the end (1924-1929) it improved massively. ...read more.