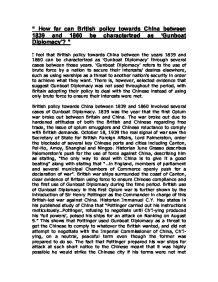 &quot; How far can British policy towards China between 1839 and 1860 be characterized as 'Gunboat Diplomacy'? &quot;

" How far can British policy towards China between 1839 and 1860 be characterized as 'Gunboat Diplomacy'? " I feel that British policy towards China between the years 1839 and 1860 can be characterized as 'Gunboat Diplomacy' through several cases between those years. 'Gunboat Diplomacy' refers to the use of brute force by a nation to secure their interests/ desires elsewhere, such as using warships as a threat to another nation's security in order to achieve what they want. There is, however, selected evidence that suggest Gunboat Diplomacy was not used throughout the period, with Britain adopting their policy to deal with the Chinese instead of using only brute force to ensure their interests were met. British policy towards China between 1839 and 1860 involved several cases of Gunboat Diplomacy. 1839 was the year that the first Opium war broke out between Britain and China. The war broke out due to hardened attitudes of both the British and Chinese regarding free trade, the issue of opium smugglers and Chinese reluctance to comply with British demands. October 18, 1939 the real signal of war saw the Secretary of State for British Foreign Affairs, Lord Palmerston, order the blockade of several key Chinese ports and cities including Canton, Pei-Ho, Amoy, Shanghai and Ningpo. Historian June Grasso describes Palemerston's push for the use of force against China, describing him as stating, "the only way to deal with China is to give it a good beating" along with stating that "...in England, members of parliament and several municipal Chambers of Commerce openly push for a declaration of war". ...read more.

10 British war ships were sent to the bay of Daya and forced their way towards Tientsin. Jack Gray describes the British as using "warships in treaty ports against Chinese citizens and officials representing the Chinese government" in this second Opium war. Historian June Grasso further backs up this view of Gunboat Diplomacy used by the British at this time, stating that the Anglo-French military expedition under Lord Elgin and Gros proceeded with force towards the North, ceasing many key areas such as Tientsin and the Taku Forts. The final period up till 1860 also saw several examples of Gunboat Diplomacy used. Treaty terms of Tientsin were submitted to the Chinese government under force on June 11th 1858, with the British commander Elgin stating "unless the treaty terms are accepted on this day, there will be a march to Peking". Fredrick Bruce further backed up this threat of force on June 26th 1858 by warning that "if the treaty is not signed this night, it will have to be signed at Peking" (quotes provided from 'The Rise of Modern China' - Hsu). The final example of Gunboat Diplomacy during this period is the foreign looting and destruction of the Emperor's Summer Palace in Beijing. Historian Seagrave describes this event - "what could not have been carried off (from the palace) was smashed, stabbed or shot...Nothing like this has occurred since the barbarians sacked Rome". While Gunboat Diplomacy was used on repeated occasions from the period between 1839 and 1860, it was not used fully throughout that period and there are several justified reasons why the policy was used on some occasions against China. ...read more.

From the end of the first Opium War in 1842 till the beginning of the second conflict in 1856 they did not take any major military action against China to impose renewal or treaties or to take any retaliation against growing anti-foreign attitude and actions within China. 14 years Britain took steps as to not engage in conflicts with China even though she was superior militarily. The decision to attack China in 1856 came only after China was virtually ignoring the signed treaty terms of Nanking and taking actions which would inevitably lead to retaliation, such as deliberately not apologizing for tearing down the British flag on the ship the 'Arrow'. The Chinese were denying foreign negotiations and discussions at all cost, and as Immanuel Hsu puts it "Even the peace minded Bowring was compelled to inform London that the extension and improvement of British relations with China would require ships of war. Overall I believe that although there were several cases of Gunboat Diplomacy being used by the British in China, it was used only used after initial attempts to peacefully negotiate matters with China and not all throughout the period between 1839 and 1860. Britain was fairly complaint towards China for large periods of time as proven by the 14 year gap between the two Opium wars mentioned above, and I believe that on the majority of occasions force was used only as a last resort by the British to gain her basic demands from China. ...read more.