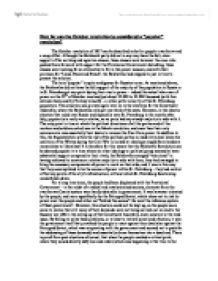 How far can the October revolution be considered a popular revolution?

How far can the October revolution be considered a "popular" revolution? The October revolution of 1917 can be described as both a popular overthrow and a coup d'�tat. Although the Bolshevik party did not in any way have the full, clear support of the working and agrarian classes, these classes were however the ones who pushed them forward: with support for the Provisional Government dwindling, these classes were looking for an alternative to fill in the power vacuum, and with their promises for "Land, Peace and Bread", the Bolsheviks had stepped in just in time to present the solution. The term "popular" is quite ambiguous for Russian terms. As mentioned above, the Bolsheviks did not have the full support of the majority of the population in Russia or in St. Petersburg at any point during their rise in power - indeed the actual take-over of power on the 25th of October involved just about 25.000 to 35.000 thousand (with this estimate been said by Trotsky himself) - a rather petite minority of the St. Petersburg population. This situation was proven again later on in the elections for the Constituent Assembly, where the Bolsheviks only got one-third of the seats. However, in the chaotic situation that ruled over Russia and especially over St. Petersburg in the months after July, popularity is really very relative, as no party had any steady majority to side with it. The only point in time at which the political directions of all the parties and all the workers and soldiers united was in the March revolution, and even then their only common aim was essentially their desire to remove the Czar from power. ...read more.

therefore the only political representative that anyone who did not support the Provisional Government had, essentially meaning that in the case of the above scenario, the only alternative were - apparently - the Bolsheviks. In this scenario, therefore, whereas before the workers, soldiers and peasants dispersed into the plenitude of political parties and ideologies, they were now directed towards just one, giving it considerable power over the rest. Indeed, records show that a rise in support for the Bolsheviks had begun not after the Kornilov affair where the government was disgraced, and therefore support for them was expected to rise, but also from before, since July. However, as due course, the Kornilov affair provided this eminent crisis: in an attempt to restore order in St. Petersburg, Kerensky gave General Kornilov the power to impose martial law, but at the last moment decided that he was moving into a coup d'�tat, and was desperately seeking troops to go against him. This confusion and insecurity proved catastrophic on two levels: firstly, Kerensky's panicky and indecisive attitude caused him to lose a great deal of support - the soldiers felt cheated by an officers' plot and refused to fight for the government anymore, while the workers now mistrusted the Soviet, as in their eyes they were the collaborators and agents of the bourgeoisie. Secondly, the Kornilov affair gave the Bolsheviks an important role in the power game: it was the Bolsheviks who stepped in to save the day, and in this way gained huge popularity, which resulted in their election as ...read more.

However, this was the factor that pushed the Bolsheviks into carrying out the October coup: at any point before this sudden surge of support, the Bolsheviks were not even considering themselves a political power to be reckoned with, let alone actually taking power all for themselves - in the July Days, the sentiments of the leading Bolshevik members veered from "wait and see" (Lenin) to "what are they doing?!" (Kamenev and Zinoviev). For this reason, the revolution can be considered popular: in taking power, the Bolsheviks did so with the support of the people, as a result of their promises to provide them with what they needed. They did not force the people to "vote Red", and despite the fact that Bolshevik support was not uniformly that high all over Russia, this did not matter, since in October 1917 their position in the St. Petersburg Soviet was equal in power as if they had been in actual government - they were only missing the name, and the October Revolution consisted of using their existing power to procure that as well. As far as contemporary Russian society after March 1917 was concerned, the government was popular as long as it was offering them what they wanted - if it didn't, it had to be removed. This is the difference between the Bolsheviks and the previous governments: they had managed to keep it. The fact solidly remains though, that at the time, the Bolsheviks were the leading power in the Soviet, and therefore in St. Petersburg, and therefore all over Russia. ...read more.