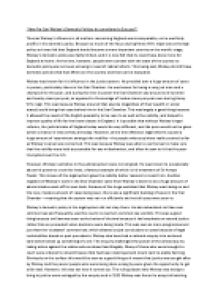 How far can Wolsey's domestic policies be considered a success?

﻿?How Far Can Wolsey?s Domestic Policies be considered a Success?? Thomas Wolsey?s influence in all matters concerning England was incomparable, so he was fairly prolific in his domestic policy. Because so much of the focus during Henry VIII?s reign was on foreign policy as it was felt that England should become a more important country on the world?s stage, Wolsey?s domestic policy was fairly limited, and it is now felt that he could have done more for England at home. At the time, however, people were content with the state of the country so domestic policy was not seen as being in need of radical reform. This being said, Wolsey did still have domestic policies that had effects on the country and that can be evaluated. Wolsey was known for his influence in the justice system. He presided over a huge amount of cases in person, particularly those in the Star Chamber. He was known for being a very just man and a champion for the poor, and during his time in power the Star Chamber saw around one hundred and twenty cases per year, as opposed to the average of twelve cases per year seen during Henry VII?s reign. ...read more.

This was a good thing because civil law was seen as the better of the two because it laid emphasis on natural justice rather than on precedent when decisions were being made. This was seen as more progressive and just than the ?outdated? common law, which allowed unjust conclusions to cases because of legal technicalities based on past precedents. Wolsey also launched a national enquiry into enclosed land which kicked up something of a stir. The enquiry challenged the power of the aristocracy by taking action against the nobles who enclosed land illegally. Many of those who were brought to court were ordered to rebuild houses that had been destroyed and return land to arable farming. Obviously on the surface this would be seen as a good thing as it meant that justice was sought after by Wolsey and the poorer people who were being done wrong by were given the opportunity to get a fair deal. However, this was not how it turned out. The ruling classes who Wolsey was trying to bring to justice were outraged by the enquiry and in 1523 Wolsey was forced to accept all existing enclosures. ...read more.

The extent to which Wolsey?s domestic policy weakened the church has been much debated by historians. It is true that a large amount of Wolsey?s influence was used to increase royal power and control over the church and in doing so the church lost a lot of its sense of independence, the church was also weakened by Wolsey?s intense centralising of policies in all aspects of ecclesiastical affairs(these policies were essentially centralised because Wolsey wanted to avoid sharing power as best he could) ? it could even be argued that it was because of Wolsey?s actions that the church was unable to withstand the attack that it came under in the 1530?s. However, to his credit Wolsey did shield the church as best he could from monarchical attack between 1515 and 1529, and tried to defend clerical privileges to the best of his ability concerning the issue of benefit of the clergy. To conclude, Wolsey had both successes and failures in his domestic policy, and the extent of both have been largely debated. I feel that, without Wolsey, the state of modern England would be very different, particularly regarding tax and the legal system, and that is to his credit. However, it is clear that he did have very significant failures such as the amicable grant and his weakening of the pre-reformation church. ...read more.