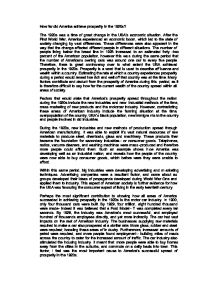 How far did America achieveprosperity in the 1920s?

How far did America achieve prosperity in the 1920s? The 1920s was a time of great change in the USA's economic situation. After the First World War, America experienced an economic boom, which led to the state of society changing by vast differences. These differences were also apparent in the way that the change effected different people in different situations. The number of people living below the bread line in 1928 increased to an estimated forty-two percent of the American population, however this was during the same period that the number of Americans owning cars was around one car to every five people. Therefore, there is great controversy over to what extent the USA achieved prosperity in the 1920s. Prosperity is a word that is used to describe affluence and wealth within a country. Estimating the rate at which a country experiences prosperity during a period would reveal hoe rich and well off that country was at the time. Many factors contribute and deduct from the prosperity of America during this period, as it is therefore difficult to say how far the current wealth of the country spread within all areas of society. ...read more.

The car had vast impacts on the rest of American industry. The businesses supplying raw materials required to make a car also prospered at a similar rate. More glass, rubber and steel were required; boosting these areas of industry. Furthermore, increased amounts of petrol were required, and more people found employment- building miles of roads across the country to cater for the increased amount of traffic. The car industry also stimulated the housing industry. It meant that more people were able to buy homes away from the cities in the suburbs, and commute on a daily basis into town. This factor, I feel was the most important cause to America's successful spread of prosperity in the 1920s. Apposed to these views, numerous factors exist which show evidence against the notion of America's wealth in the 1920s being nationwide, and influencing every area of society. A clear example of an industry, and therefore it's people, which did not benefit from this time is farming. The average farm income fell from twenty- two billion dollars in 1919, to thirteen billion dollars in 1928. ...read more.

A large number worked in the construction industry where, at the time, there was a big boom. However, despite this increase in the industries size, the average was only rose by four percent in the 1920s, because the immigrants were a source of cheap labour, and more work was becoming mechanised- resulting the lack of need for labourers. The unemployment rate within new immigrants rose throughout the decade. Older industries were undergoing modernisation. Some industries such as steel, for which there was a boom, benefited from general expansion. However, in others, particularly the raw materials industries- cotton, coal, tin and copper- were suffering. There was an overproduction in these industries, prices dropped and wages fell. From looking at this evidence, it is clear that the prosperity and affluence of the USA in the 1920 was highly apparent. However, it is also clear that it did not reach all areas of society. Therefore, it is justified to say that prosperity during this period was partial- as not everyone was buying cars, radios and other consumer goods. It is vital to remember that during a boom period, it is difficult to spread the wealth of the country evenly- due to the determination for personal gain, not for equality. ...read more.