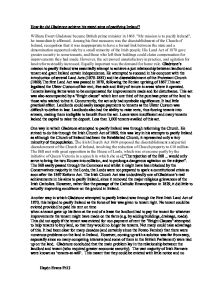 How far did Gladstone achieve his stated aim of pacifying Ireland

How far did Gladstone achieve his stated aims of pacifying Ireland? William Ewart Gladstone became British prime minister in 1868. "My mission is to pacify Ireland", he immediately affirmed. Among his first measures was the disestablishment of the Church of Ireland, recognition that it was inappropriate to have a formal link between the state and a denomination supported only by a small minority of the Irish people. His Land Act of 1870 gave greater security to some tenants, and those who left their holdings could claim compensation for improvements they had made. However, the act proved unsatisfactory in practice, and agitation for land reform steadily increased. Equally important was the demand for home rule. Gladstone's mission to pacify Ireland was essentially attempt to achieve a just relationship between landlord and tenant and grant Ireland certain independence. He attempted to succeed in his conquest with the introduction of several Land Acts (1870-1881) and the disestablishment of the Protestant Church (1869).The first Land Act was passed in 1870, following the Fenian uprising of 1867.This act legalised the Ulster Custom of fair rent, free sale and fixity of tenure in areas where it operated. ...read more.

The eviction clauses had little impact because there was no provision to control rents. It could also be argued that the Land Act did not really address the true problems in Ireland as they existed in the early 1870's. Poverty was perhaps not due primarily to the attitudes and actions of landlords, but resulted from a lack of economic growth and cultivable land. In the 20 years after the famine rents were moderate and evictions were few. Furthermore, some of the weaknesses of the legislation were masked by the fact that industry was enjoying a period of prosperity at the time. Gladstone also tried to pacify Ireland through reforms in education. University reform was much needed since although Catholics controlled a number of small colleges, they had no major degree-awarding institutions of their own. Trinity College Dublin was an Anglican foundation and the non-denominational colleges established by Peel in the 1840's were denounced by the Catholic clergy. Gladstone's plan was a new national, non-denominational University of Dublin, which would embrace both Trinity College and the present/future Catholic colleges. There were a number of potential problems with such a measure. ...read more.

Even many committed Gladstonians considered that 'to continue with it in such circumstances seemed...sheer perversity'. The Bill failed and Gladstone resigned within months. In conclusion Gladstone's mission to pacify Ireland had its successes and failures. The successes were the Irish Church Act, since it removed the major religious grievances of the Irish Catholics. It did not by any means solve religious differences, Protestants still owned much of the land, and they still dominated the resented landlord class. The consequences of the act were more symbolic than practical, it did very little to pacify Ireland. Some historians have gone further to say that the Land Act was more to the advantage of Gladstone than it was to the people of Ireland and that it was simply a political stroke to 'bind Ireland to the Union...by proving that the Westminster Parliament was prepared to legislate for what the mass of Irish people considered to be their legitimate grievances'. Overall Gladstone failed in his attempts to pacify Ireland as most of his acts and reforms failed and the final Home Rule Bill led to him resigning within months of it. ?? ?? ?? ?? Haydn Evans Ph13 ...read more.