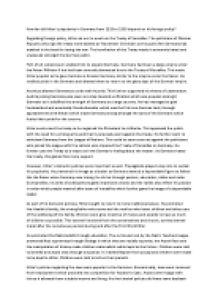 How far did Hitlers popularity in Germany from 1933 to 1939 depend on his foreign policy?

﻿How far did Hitler?s popularity in Germany from 1933 to 1939 depend on his foreign policy? Regarding foreign policy, Hitler set out to overturn the Treaty of Versailles. The politicians of Weimar Republic who sign the treaty were labeled as ?November Criminals? as the public felt Germany had stabbed in the back for losing the war. The humiliation of this Treaty made it extremely hated and unpopular amongst the German public. First of all, Lebensraum enabled him to expand Germany. Germany had been a large empire under the Kaiser Wilhelm II but had been severely downsized due to the Treaty of Versailles. This made Hitler popular as he gave Germans a Greater Germany similar to the empire under the Kaiser. ...read more.

He further went to withdraw Germany from the League of Nations. This could be seen as an act against the politicians who joined the league with the nations who imposed the Treaty of Versailles on Germany. He further uses the Treaty as a way to stir the German?s feeling about the matter. As Germans hated the treaty, this gained him more support. However, Hitler?s domestic policies were important as well. Propaganda played a key role to sustain his popularity. He promoted his image as a leader as Germans wanted a dependable figure to follow like the Kaiser when Germany was strong. He did so through posters, education, rallies and radio. ...read more.

Children were told to identify and avoid Jews through education. It instilled Nazism from young and children were made to be loyal to Hitler. Children were told to tell on their parents. Hitler?s policies regarding the Jews were popular to the Germans. Economically, Jews were removed from employment which provided less competition for Aryans for jobs. Aryans were happy with this as it allowed them a stable income and living. His Anti-Jewish policies did have some backlash mainly from the Church. However, they were mainly sidelined as Hitler provided the Aryans with a scapegoat for all their problems so Germans could have something to blame which appeased them. Both foreign and domestic policies were important to Hitler however his domestic policies really secured his popularity as it involved the Germans themselves. ...read more.