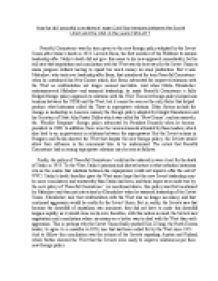 How far did peaceful coexistence ease Cold War tensions between the Soviet Union and the USA in the years 195361?

﻿How far did ?peaceful coexistence? ease Cold War tensions between the Soviet Union and the USA in the years 1953?61? Peaceful Coexistence was the term given to the new foreign policy adopted by the Soviet Union after Stalin?s death in 1953. Lavereti Beria, the first member of the Politburo to assume leadership after Stalin?s death did not give this name to his new approach immediately, but he still saw that negotiation and conciliation with the West was the best way for the Soviet Union to make progress without having to spend too much money on arms production. But it was Malenkov, who took over leadership after Beria, that introduced the term Peaceful Coexistence when he introduced his New Course which, like Beria, advocated for improved relations with the West as confrontation not longer seemed inevitable. And when Nikita Khrushchev outmanoeuvred Malenkov and assumed leadership, he made Peaceful Coexistence a fully fledged foreign policy approach to relations with the West. This new foreign policy helped ease tensions between the USSR and the West, but it cannot be seen as the only factor that helped produce what historians called the Thaw in superpower relations. Other factors include the change in leadership in America, namely the foreign policy adopted by Dwight Eisenhower and his Secretary of State John Foster Dulles which was called the ?New Course?, and successively the ?Flexible Response? foreign policy advocated by President Kennedy when he became president in 1960. ...read more.

By 1958, West Berlin was an island of prosperity in the midst of the poverty stricken Soviet controlled East Germany. Those in East Berlin especially saw the stark contrast in living standards, and the luxury enjoyed in West Berlin quickly drew East Berliners to cross the border into West Berlin. This exodus of East Berliners comprised mostly of youths as well as intellectuals, whom the Soviets could not afford to lose. This exodus also served in humiliating the USSR, for it showed how their people could not stand to live under their rule and would leave by any means necessary. Khrushchev blamed this exodus on the West, and he gave them an ultimatum that if the Western Allies(Britain, France and the USA) did not leave Berlin, then he would take drastic measures against them. In order to appease Khrushchev, Eisenhower invited him to the USA, and after the visit Khrushchev dropped the ultimatum. This shows us the impact that face-to-face talks had on superpower relations, but it did not mean that the ultimatum would be forgotten. In 1960, after a U2 spy plane was shot down over Soviet air space, Khrushchev raised the ultimatum again. But after Kennedy?s ?Ich bin ein Berliner? speech which told not only Khrushchev but the Berliners also that the West would not leave the people, Khrushchev ordered the building of the Berlin Wall in 1961. ...read more.

Moreover, another factor that helped ease the tensions between the superpowers was the potential of Mutually Assured Destruction, which made conflict very risky due to the devastating nature of the nuclear weapons being produced. The rise of MAD therefore made conciliation a better course of action, as it would lessen the risk of nuclear annihilation. In conclusion, the policy of ?Peaceful Coexistence? helped ease superpower relations to a certain extent, for it provided an impetus for greater conciliation between the superpowers and in place of conflict, this new policy also called for deterrents from conflict such as the Arms race, Space race and Sports race. However, there were instances that Soviet actions somewhat betrayed the aims of their policy and these actions led to the worsening of tensions, namely the Soviet reaction to the Hungarian Uprising and the building of the Berlin Wall in 1961. But it is clear that it was not only this new policy that led to the easing of tensions, for the role of Eisenhower, Dulles and Kennedy also led to greater conciliation and the establishing of a dialogue between the two sides helped improved superpower relations. And so I believe that it was the more conciliatory approach of the West towards the USSR in the period 1953-61 that helped improve superpower relations in this period that was known as the Thaw. ...read more.