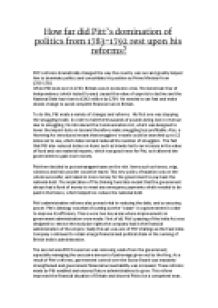 How far did Pitts domination of politics from 1783-1792 rest upon his reforms?

ï»¿How far did Pitt’s domination of politics from 1783-1792 rest upon his reforms? Pitt’s reforms dramatically changed the way the country was run and greatly helped him to dominate politics and consolidate his position as Prime Minister from 1783-1792. When Pitt took over in 1783, Britain was in economic crisis. The American War of Independence (which lasted 8 years) caused the value of exports to decline and the National Debt had risen to £242 million by 1784. He needed to act fast and make drastic change to avoid complete financial ruin in Britain. To do this, Pitt made a variety of changes and reforms. His first one was stopping the smuggling trade, in order to halt the thousands of pounds being lost in revenue due to smuggling. He introduced the Communication Act, which was designed to lower the import duty on tea and therefore make smuggling less profitable. Also, a Hovering Act introduced meant that smugglers’ vessels could be searched up to 12 miles out to sea, which deterred and reduced the number of smugglers. The fact that Pitt also reduced duties on items such as brandy led to an increase in the value of food and raw material imports, which was good news for Pitt, as it allowed the government to gain more money. Pitt then decided to put extravagant taxes on the rich. ...read more.

Ideas from the French could spread to the British, and a revolution was the last thing Pitt needed. To prevent such a thing from happening, it was essential for him to introduce a variety of reforms to laws and acts. Between May 1794 and July 1795 and 1798 to 1801 the Habeas Corpus Amendment act was suspended, which meant that people could be arrested on suspicion of committing a crime! Although it was extreme, it made sure that people would be completely deterred from plotting or committing a crime, which helped decrease the likelihood of a revolution starting. The second acts that Pitt implemented where the Seditious Meetings Act and Treasonable Practices act. Best known as the ?two acts?, they banned meetings that had not been approved of by the local magistrate. They attempted to keep an eye on illegal gatherings and broadened the definition of treason to allow more arrests of known radicals. This stopped people from organising gatherings and so prevented the ideas of individuals to be spread onto other people. In 1797, a law was passed which increased the penalty for undermining authority to the military. This was implemented after a mutiny in the Navy, and the law was extremely effective as it ensured troops to stay loyal, or get a severe punishment. It was also essential, as Britain needed to be fully prepared to fight off any revolution, especially after shortages in the military following the war with America. ...read more.

Also, Earl Grey and Samuel Whitbread, who were two for Fox?s political allies, demanded parliamentary reform just at the time when events in France were becoming more extreme. Whig landowners, who were traditionally on the side of Fox, felt endangered by Fox?s extreme views in supporting the French Revolution, and feared for their lands and property. Not only did other fellow Whigs disagree with Fox?s ideologies, voters also became repelled by the views, and the Whigs lost a great deal of support and public sympathy, which led to their downfall and their eventual failure to seize power from Pitt. Pitt saw this an opportunity to ?win over? moderate Whigs who felt let down by Fox?s views, and as a result, many moderate Whigs, led by the Duke of Portland, joined Pitt?s Conservative administration in 1794. This was a large step in Pitt stabilising and securing his government, and this new-looking government was the foundation of what became the Conservative Party of the 19th and 20th centuries, which highlights the significance of moderate Whig?s breaking free from Fox and joining Pitt. In conclusion, although other various factors greatly helped him to secure his place in power during 1783-1792, it was his cunning government reforms that helped keep the country in order and helped restore the economy, which were the defining part in Pitt?s domination of British politics towards the end of the 18th Century. Thomas Smith 6F3 ...read more.