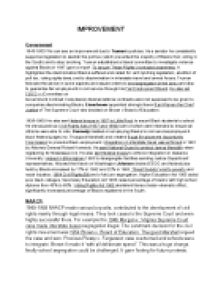 How far did situation of Blacks improve in years 1945-55?

﻿IMPROVEMENT Government 1945-1955: We can see an improvement due to Truman?s policies. As a senator he consistently supported legislation to abolish the poll tax (which prevented the majority of Blacks from voting in the South) and to stop lynching. Truman established a liberal committee to investigate violence against Blacks in 1947 gave a report ?To secure These Rights?-increased awareness. It highlighted the discrimination Blacks suffered and called for: anti lynching legislation, abolition of poll tax, voting rights laws, end to discrimination in interstate travel and armed forces. Truman followed the advice in some aspects and issued orders to end segregation in the army and also to guarantee fair employment in civil service through his Fair Employment Board. He also set CGCC-> (Committee on Government Contract Compliance) ...read more.

Stayed the same 1945-1955: Brown didn?t set a precise date, only Brown II said ?with all deliberate speed? but it gave Southern states an excuse to do nothing and say ?it?s impossible/we need time? In response to Brown White Citizens Councils were formed to oppose desegregation, KKK was revitalised (massive white backlash). (1956 Southern Manifesto created to prevent school integration signed by 101 southern congressmen) create No support from federal government in enforcing Brown. Emmett Tilly murdered in 1955 and murderers found not guilty-this showed how things were in the South. They could get away with killing Blacks. Blacks not allowed to vote. 1965: Civil Rights Acts of 1957 and 1960 were unsuccessful as they increased the number of Black voters only by 3%. Situation in Little Rock in 1957 showed the massive grassroots resistance, students were spat on, attacked. Kennedy unresolved problem of ghettos, de facto segregation ...read more.