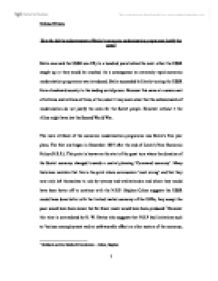 How far did the achievements of Stalin's economic modernisation programme justify the costs?

How far did the achievements of Stalin's economic modernisation programme justify the costs? Stalin once said the USSR was fifty to a hundred years behind the west: either the USSR caught up or they would be crushed. As a consequence an extremely rapid economic modernisation programme was introduced. Stalin succeeded brilliantly turning the USSR from a backward country to the leading world power. However this came at a severe cost of millions and millions of lives, at the outset it may seem clear that the achievements of modernisation do not justify the costs for the Soviet people. However without it the Allies might have lost the Second World War. The main attribute of the economic modernisation programme was Stalin's five year plans. The first one began in December 1927 after the end of Lenin's New Economic Policy (N.E.P.). This point is known as the start of the great turn where the direction of the Soviet economy changed towards a central planning 'Command economy'. Many historians maintain that this is the point where communism 'went wrong' and that they now only left themselves to rule by tyranny and totalitarianism and where they would have been better off to continue with the N.E.P. Stephen Cohen suggests the USSR would have done better with the limited market economy of the 1920s, they accept the pace would have been slower but far fewer waste would have been produced.1 However this view is contradicted by R. W. Davies who suggests that N.E.P had limitations such as "serious unemployment and an unfavourable effect on other sectors of the economy, such as education and the railways"2 Davies believed that decision to begin a rapid industrialisation programme was made because of the political judgement of how essential it was for the USSR to increase their defences and establish a heavy industrial sector. Targets for the plans were set for industrial enterprises and were backed by law so failure to meet them was treated as a criminal offence acting as a very effective motivator. ...read more.

There was an extreme human cost to collectivisation especially in Ukraine and Kazakhstan where there was mass famine, this was kept a secret to the world therefore tragically no foreign aid was received. To add to this, Kazakhstan was where greatest depletion of livestock occurred more than anywhere else in the USSR with high 80's% of all livestock destroyed.13 "It was made an offence punishable by five years in prison simply to refer to it" (the denied famine)14. "Families died lying outside warehouses full of grain but under armed guard"15 Estimates of the deaths vary wildly and are impossible to verify as with all communist figures; a figure of five-million overall is a reasonable average.16 However Chris Ward has investigated the human cost and believes the figures could be as high as 20.1 million deaths including famine caused by collectivisation, de-kulakisation, gulags, collective drive, and terror.17 Overall collectivisation was a disaster. Stalin confessed to Churchill that it had caused more damage to the Soviet Union than the German invasion. Urban workers could not manage collective farms. In 1932, the private plot allowance was given: half a hectare on which produce could be grown. It is no surprise that the peasants devoted all of their energy to their private plots and the barest minimum to the collectives. Therefore the majority of agricultural goods came from the peasant's plots rather than the collective farms; furthermore it took until 1940 for grain to reach the 1914 level and took until 1953 for livestock to reach the pre-collectivisation levels. Additionally the peasants fared atrociously, even worse than the workers of the five year plans because of the mass numbers killed or sent to labour camps. Finally Stalin purposely caused a famine in the Ukraine to destroy the people there seeking independence from his rule; the result was that an estimated 7 million people starved to death in the area known as 'the breadbasket' of Europe, Stalin deprived these people of food that they had grown themselves!18 Simply no-one gained from collectivisation proving it was a complete failure.19 Workers also suffered in the economic modernisation programme. ...read more.