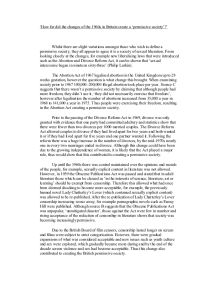 'How far did the changes of the 1960s in Britain create a 'permissive society'?'

'How far did the changes of the 1960s in Britain create a 'permissive society'?' Whilst there are slight variations amongst those who wish to define a permissive society, they all appear to agree it is a society of s****l liberation. From looking closely at the changes, for example new liberalising laws that were introduced such as the Abortion and Divorce Reform Act, it can be shown that 's****l intercourse began in nineteen sixty-three' (Philip Larkin). The Abortion Act of 1967 legalised abortion in the United Kingdom up to 28 weeks gestation, however the question is what change this brought. When examining society prior to 1967 100,000-200,000 illegal abortion took place per year. Source C suggests that there wasn't a permissive society by claiming that although people had more freedom, they didn't use it, 'they did not necessarily exercise that freedom', however after legalisation the number of abortions increased from 35,000 a year in 1968 to 141,000 a year in 1975. ...read more.

However, in 1959 the Obscene Publications Act was passed and stated that in adult literature those which can be classed as 'in the interests of science, literature, art or learning' should be exempt from censorship. Therefore this allowed what had once been deemed shocking to become more acceptable, for example, the previously banned novel Lady Chatterley's Lover (which contained s******y explicit content) was allowed to be re-published. After the re-publication of Lady Chatterley's Lover censorship increasing worse away, for example p**********c novels such as f***y Hill were published. Although source B suggests that the Obscene Publications Act was unpopular, 'unmitigated disaster', those against the Act were few in number and rising acceptance of the reduction of censorship in literature shows that society was becoming increasingly permissive. Due to the British Board of film censors, censorship lasted longer on screen and films were subject to strict categorisation. ...read more.

Before the 1960s women were encouraged to give up their job and personal independence when married or on the arrival of their first child and it was seen as their duty to be a good wife and mother. However, the introduction of the oral contraceptive pill and the Divorce Reform Act society became permissive. Women were able take away the inevitability of pregnancy and plan their lives, including careers. The Divorce Reform Act proved to show that marriage was becoming less important. Referring back to source C's claim that these changes did not create a permissive society due to people not using their freedom, 'they did not necessarily exercise that freedom', it can be shown that a permissive society was created due to these changes as the number of illegitimate births rose from 5.8 per cent to 8.2 per cent and as mentioned earlier, the number of marriages ending in divorce rose. As can be seen, due to an accumulation of reduced censorship and liberalising laws, there was a permissive society in Britain. ?? ?? ?? ?? ...read more.

The author has a clear knowledge of the key legal changes that allowed for a permissive society but the central debate is missed; do these legal reforms reflect or create British society in the 1960s? Only one side of the debate is really addressed. 3 out of 5 stars.