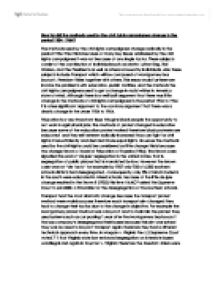 How far did the methods used by the civil rights campaigners change in the period 1954- 1964?

The Brown case signalled the end of "de jure" segregation in the United States, that is, segregation of public places that is mandated by law. However the brown case was not "de facto" for example by 1957 only 750 of 6,300 southern schools districts had desegregated, consequently, only 3% of black students in the south were educated in mixed schools. Because of the little de jure change resulted in the Brown II (1955) this time NAACP asked the Supreme Court to establish a timetable for the desegregation of the southern schools. Transport had the most dramatic change because the transport protest method were mainly success therefore each transport aim changed they had to change their tactics due to the change in objective. ...read more.

Methods used to change some laws in public facilities were mainly different the sit-ins of 1960 in Greensboro for example was very unique at its time as it was not set up by any civil rights group it was just a couple of student being rebellious by sit-in in a Woolworth. However 1 year after the Greensboro sit-ins 810 towns had desegregated and many black students did the same thing as they were influence by the Greensboro sit-ins. 'Bull' Connor changed his tactics in the Birmingham campaign for example he used legal methods, such as obtaining a court injunction against demonstrations in certain precincts, in order to weaken the protests. The presidents got involved in civil right more as time went on In conclusion in some cases methods of protest did change for example transport however some methods did not change as much for example methods used for public facilities. ...read more.