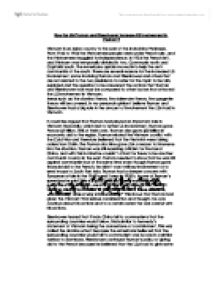 How far did Truman and Eisenhower increase US involvement in Vietnam?

How far did Truman and Eisenhower increase US involvement in Vietnam? Vietnam is an Asian country to the east of the Indochina Peninsula. From 1946 to 1954 the Vietnamese people were under French rule, and the Vietnamese struggled for independence. In 1954 the French left, and Vietnam was temporarily divided in two, Communist north and Capitalist south. The Americans quickly moved into help the anti-communists of the south. There are several reasons for the increased US involvement, some involving Truman and Eisenhower and others that are not related to the two presidents. In order for the topic to be fully explored and the question to be answered; the actions that Truman and Eisenhower took must be compared to other factors that affected the US involvement in Vietnam. Areas such as; the domino theory, the stalemate theory, the quagmire theory will be covered. ...read more.

In one of Truman's speeches he said "We are gradually increasing our stake in the outcome of the struggle...we are dangerously close to the point of being so deeply committed to direct intervention. These situations, unfortunately, have a way of snowballing." This shows that Truman had given the Vietnam War serious consideration and thought, he was cautious about his actions and to a certain extent he was careful with his actions. Eisenhower feared that if Indo-China fell to communisms that the surrounding countries would follow, this is similar to Kennedy's statement of Vietnam being the cornerstone of containment. This was called the domino effect because the Americans believed that the surrounding countries would fall to communism one by one in a similar fashion to dominoes. Eisenhower continued Truman's policy of giving aid to the French because he believed that the USA had to give some support to the French. ...read more.

Diem was what America called 'the best of a bad bunch', he wasn't the most popular Prime minister, he was Catholic in a predominantly Buddhist country. It seemed as if he had no compassion for the peasants, and it looked as if he abused his power to give jobs to his family. Many people opposed the government of Diem. It would seem that Eisenhower's decisions led to a downward spiral of knock-on effects that resulted in America being heavily involved in the Vietnam situation, although he kept on Truman's policy. It would seem as though Truman and Eisenhower increased US involvement considerably. It was for this reason that they suffered a lot of opposition through the media, people of America and advisors. The Truman doctrine played a vital role in both Presidents careers as well as the many others that succeeded them such as kennedy, Johnson and even Nixon. Eisenhower was more passive that Truman, but this doesn't meant that he shouldn't be held equally responsible for the situation in Vietnam. ...read more.