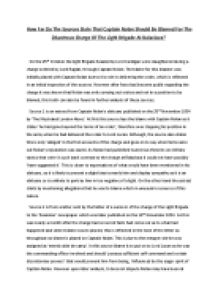 How Far Do The Sources State That Captain Nolan Should Be Blamed For The Disastrous Charge Of The Light Brigade At Balaclava?

﻿How Far Do The Sources State That Captain Nolan Should Be Blamed For The Disastrous Charge Of The Light Brigade At Balaclava? On the 25th October the light Brigade headed by Lord Cardigan were slaughtered during a charge ordered by Lord Raglan, through Captain Nolan. The blame for this disaster was initially placed with Captain Nolan due to his role in delivering the order, which is reflected in an initial inspection of the sources. However after facts had become public regarding the charge it was shown that Nolan was only carrying out orders and not in a position to be blamed, this truth can also be found in further analysis of these sources. Source 1 is an extract from Captain Nolan?s obituary published on the 25th November 1854 by ?The Illustrated London News?. At first this source lays the blame with Captain Nolan as it states ?he had gone beyond the terms of an order?, therefore over stepping his position in the army when he had delivered the order to Lord Lucan. Although, the source also states this is only ?alleged? in the first accounts of the charge and goes on to say when facts came out Nolan?s reputation was saved. ...read more.

This is due to the meagre role he was assigned as ?merely aide de camp?. In this source blame is to put on to Lord Lucan as he was the commanding officer involved and should ?possess sufficient self-command and certain discretionary powers? that would prevent him from being, ?influenced by the eager spirit of Captain Nolan. However upon later analysis, it does not dispute Nolan may have been at fault in the charge but due to the nature of his role he should have been overruled by Lord Lucan. As this source was written by a father who was told a firsthand account by his son, who was a soldier who survived the charge, it is highly reliable as he actually participated in the event. Also, as the source was anonymously published it is unlikely to have been exaggerated for profit or self-gain. Similarly in this source as in source 1, Nolan is described to have an ?excess of enthusiasm? and eager spirit. Calling into question if he was correctly suited for the role he played, as he was only there to assist and these qualities may have hindered his abilities to follow orders instead making him more inclined to do what he believed was right for the situation. ...read more.

Furthermore he would have been primarily concerned with saving his reputation, and doing so by passing on the blame. This source contrasted to source 2 on the matter of blame as neither lay it on Nolan; source 2 does however blame Lord Lucan for being influenced. Source 3 disagrees with this, as it says Raglan chose Nolan to deliver the order despite being ?ill-suited? for the role. This is unexpected as both sources were written by a participant of the charge, giving both primary sources a higher level of reliability. In conclusion, after more detailed analysis of each of the sources it can be seen that neither of the 3 place any blame on to Captain Nolan, as he was not deemed to be in a ranking position to have been given power to make any orders and was only there to act as an ?aide de camp. Furthermore, even when he was at fault the commanding officers around him should have been of sufficient self- command to have over ruled his decisions leaving there to be no reason for Nolan to have taken blame for his part in the disastrous charge. ...read more.