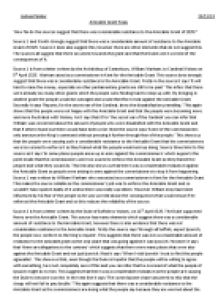 How far do the sources suggest that there was considerable resistance to the Amicable Grant of 1525?

This suggests that there was a considerable resistance as the people are causing the Duke to become worried. In the next line it says ?The commissioners have answered to this that the clergy will not fail to pay double.? This again suggests that there was a considerable resistance to the Amicable Grant as the commissioners are doing what the people say because they are worried about the possible trouble that could happen if the people get fed up with the Grant and so the commissioners are trying to keep them satisfied. The source then says ?They say they do not yet see the clergy being made to pay, while the lay people are required to pay?. This once again shows us that there is a considerable resistance as it infers the people have refused to pay. As they are willing to break the law and even risk going to prison. Lastly the sources says ?I wish to know the authority the collectors shall have if any person should refuse to pay.? From this you can see that the Duke of Suffolk was very scared and wanted to ensure there was a law against not paying the tax so that the people would not be able ...read more.

This source however is not the most reliable as it may have been written by the commissioner in an attempt to stop the unrest that was being experienced. Source 3 also strongly suggests that there was a considerable resistance against the Grant as Henry speaks of people arising up in arms against the commissioners which shows they had resisted the Grant. This source is fairly reliable as it would have been in Henry?s best interests to allow the Grant as it would have made him richer so he would not make something up to try and stop the Grant. Source 2 does have elements which suggest there was a considerable resistance such as where the Duke is asking what authority he has if any refuses to pay which shows he is frightened of the resistance against the Grant. However there are also elements which suggest that there was not a considerable resistance to the Amicable Grant as it says that only Ipswich in the whole of Suffolk was against Suffolk which suggests there wasn?t a considerable resistance. This source is also fairly unreliable as the Duke may have not been telling the whole truth in order to make Wolsey believe he is diligent over his county. ...read more.