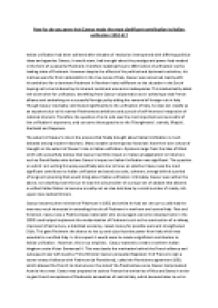 How far do you agree that Cavour made the most significant contribution to Italian unification 1852-61?

﻿How far do you agree that Cavour made the most significant contribution to Italian unification 1852-61? Italian unification had been achieved after decades of revolution interspersed with differing political ideas and agendas. Cavour, it would seem, had brought about the prestige and power Italy needed in the form of a powerful Piedmont, therefore realizing the pre 1848 notion of unification via the leading state of Piedmont. However despite the effects of his political and diplomatic activities, his motives were far from nationalistic in the true sense of Italy. Cavour was concerned mainly with his ambitions for a dominant Piedmont in Northern Italy indifferent to the situation in the South hoping not to be hindered by its inherent social and economic inadequacies. This inadvertently aided the wider drive for unification, benefiting from Cavour's diplomatic tact in achieving a vital French alliance and embarking on a successful foreign policy aiding the removal of foreign rule in Italy. Though Cavour inevitably contributed significantly to the unification of Italy, he does not classify as an exponent due to his narrow Piedmontese ambitions and pursuit of self-interests irrespective of national interests. ...read more.

These states accepted potential unification under the government of Piedmont thanks to Cavour's determination and also the help of the National society, who were encouraging voters in the Central Duchies to request annexation by Piedmont. To achieve Italian unity, Cavour knew he would never be able to rely on a revolt from the people nor the secret societies that were very popular. Italian Unification would have to be achieved through fierce political combat to drive the Austrian Empire out, and then brutal war on the smaller powers of the Italian peninsula. To gain a foothold in the grand political arena of Europe, Cavour sent troops to Russia to participate in the Crimean War in 1854. Whereas Austria got no support from Russia because of its failure to support the Russians during the Crimean War. As a result this helped indirectly unify Italy due to Austria?s diplomatic isolation and having lost control of northern Italy, Austria was in no position to prevent Garibaldi?s invasion in the south. Cavour did play a significant role in Italian unification but he wasn?t the sole reason for a unified Italy; there were several other crucial factors one being the role that Garibaldi played. ...read more.

France was looking to undermine Austria?s position in Italy which helped Piedmont to remove Austrian power from Lombardy and Venetia. Britain was sympathetic to the cause of Italian nationalism and the British navy also played a role in Garibaldi?s invasion of Sicily. Without support from Britain?s navy, ?Garibaldi?s thousand? may not have been able to conquered southern Italy thus making it impossible to unite north with south which would prevent any means of unification. Cavour was initially motivated to make Piedmont grand, but I feel no unification would have been possible without the removal of Austrian power from the peninsula. Cavour?s negotiation of the Plombieres agreement was crucial in achieving this. His intervention in the south in 1860 insured that Italy was unified under the king of Piedmont. For these reasons I agree that he did play a significant contribution to Italian unification but there are other crucial factors, namely Garibaldi?s role in the south and the role of other European powers which contributed to the unification of Italy. It is clear that without these other contributing factors, Cavour would not have been able to solely unify Italy and the fact that it wasn?t his original aim, demonstrates that his significance was almost an accidental one. ...read more.