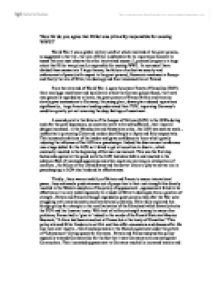 'How far do you agree that Hitler was primarily responsible for causing WWII?'

'How far do you agree that Hitler was primarily responsible for causing WWII?' World War 2 was a global military conflict which involved all the great powers, as suggested in the title , the role of Hitler is debatable for its importance however to assess this one must observe the other intertwined causes .I , personally agree to a large extent that Hitler was primarily responsible for causing WW2. In my essay I have divided these causes into 3 large themes, the failure of collective security and enforcement of peace (with respect to the great powers), Economic weakness in Europe and finally the role of Hitler, his ideology and final miscalculation at Poland. From the very end of World War 1, upon the severe Treaty of Versailles (TOV) there was huge resentment and humiliation which the German people faced , the treaty was generally regarded as to harsh, the great powers of France Britain and America slowly gave concessions to Germany, the young plan , dawes plan reduced reparations significantly , large American lending undermined their TOV, improving Germany's condition greatly yet not removing the deep feelings of resentment . A second point is the failure of the League of Nations (LON) ...read more.

This policy allowed Hitler freedom to act first and then offer concessions and discuss after. He also took over Austria , then Czechoslovakia at the Munich agreement under the pretext of "Lebensraum" (living space) for Germans . Britain and France adopted this policy especially towards Germany also for the fact that it saw Germany as an enemy against Communism. Their increased appeasement to Germany resulted in increased tension and their failure to win support from the Soviet Union , whereas Hitler took full advantage and created the n**i Soviet Pact. Economically the European Powers were greatly weakened after WW2 and compounded by the Great Depression. This engendered a growing mood of resentment and disillusionment with the capitalist system in general and with the more powerful trading economies such resentment was expressed in ideas of self sufficiency or autarky. This led to protectionist and isolationist policies which undermined collective action and cooperation. It stimulated the desire for empire building from the "have not" countries who resented the fact that Britain and France could fall back on their empire. Also the fear of Japan, Italy and Germany asserting their right to empires had the effect of sharpening conflicts over markets and raw materials, undermining economic cooperation and once again arousing dreams of imperial conquest. ...read more.

It too was Hitler's miscalculation of British and French actions with respect to Poland which was the immediate cause of WW2. Hitler thought the Munich Agreement hag given him the green light and thus over confidence set in. Simultaneously Britain and France realised that Appeasement had failed and in a favourable set of international and domestic conditions. In conclusion, I agree that Hitler was primarily responsible for the cause of WW2 to a large extent as the other causes although important, are understandable or justified. America which had helped out greatly in WW1 had to respect its people's feelings to stay out of European affairs and this caused the ineffectiveness of the LON as a peacekeeping organisation as it had little strength for the task. Economically, the route taken of Autarky and empire building was seen as necessary at the time and the Policy of Appeasement was virtually compulsory due to economic difficulties , lack of military strength and guilt of such a harsh peace treaty . However Hitler's actions were fuelled by passion , unnecessary egotistical , Nationalistic actions , similar to his decision to exterminate millions of Jews , his international policies , decisions were uncalled for , indeed without his pressure on Poland , war would not have happened. Jonathan Taylor 5. ...read more.