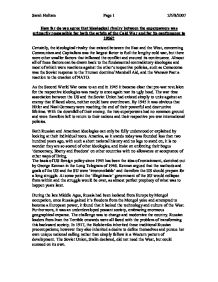 How far do you agree that ideological rivalry between the superpowers was primarily responsible for both the origin of the Cold War and for its continuance to1956?

How far do you agree that ideological rivalry between the superpowers was primarily responsible for both the origin of the Cold War and for its continuance to 1956? Certainly, the ideological rivalry that existed between the East and the West, concerning Communism and Capitalism was the largest factor to fuel the lengthy cold war, but there were other smaller factors that inflamed the conflict and ensured its continuance. Almost all of these factors can be drawn back to the fundamental contradictory ideologies and most of which were reactions against the other's respective policies, such as Comecome was the Soviet response to the Truman doctrine/ Marshall Aid, and the Warsaw Pact a reaction to the creation of NATO. As the Second World War came to an end in 1945 it became clear that pre-war revulsion for the respective ideologies was ready to once again rear its ugly head. The war time association between the US and the Soviet Union had existed simply to unite against an enemy that if faced alone, neither could have overthrown. By 1945 it was obvious that Hitler and n**i Germany were reaching the end of their powerful and destructive lifetime. With the downfall of their enemy, the two superpowers had no common ground and were therefore left to return to their nations and their respective pre-war international policies. ...read more.

Suspicion of the West thus came to be deeply embedded in the Bolshevik mentality; the West was the enemy against which Bolshevism defined its identity. It was therefore, essentially, a 'reactive' identity; Soviet socialism, constructed as a protest against Western capitalism, was 'an anti-world to Capitalism' (Kotkin 1995). Personality clashes between the two superpower leaders, Stalin and any of the US Presidents once again comes back to their completely opposing ideological beliefs and their individual fears of the other's possible world domination. So when Stalin died in 1953 it was unclear how, or even if, Soviet politics could maintain its hard-line policies both internationally against America and internally. However, in 1956 Khrushchev, the new Soviet leader made his famous secret speech, clearly criticizing Stalin this, almost even more clearly than even Stalin's death, signified the end of Stalinism. Khrushchev's appointment marked the end of the relationship between Stalin and the West. Brimming with positive ideas for 'peaceful coexistence', and a much larger power base than Stalin's dictatorship ever allowed, the relationship between Khrushchev and the west began, and that's a whole other story. The Cold War was an ideological and geographical struggle between two opposing systems. Equally important, it was a struggle that took place during the first fifty years of the nuclear age, and the existence of nuclear weapons greatly affected the nature of the struggle. ...read more.

I fully agree that fundamentally the cold war was a confrontation between the United States and the Soviet Union, fuelled on both sides by the belief that the ideology of the other side had to be destroyed. It is because of this that co-existence was not possible- one side could only win at the expense of the other, no matter how long either side had to wait for their victory, the ideological hatred ran so deep that both sides that neither side was prepared to jeopardize their own way of life for the benefit of the other. The Soviet Union held to Lenin's belief that conflict between communism and capitalism was 'inevitable'. The United States believed that peace and stability in the world would only emerge when the evil of communism had been exorcised. At the ideological level Moscow's communist world-view, which saw capitalism as absolute evil, fed off Washington's world-view, which saw communism as an absolute evil, and in this way helped to sustain the others prophecy. Every action that either power took was followed by an almost immediate reaction from the other, the continuation of the Cold War not only until 1956 but until the Soviet Unions downfall in 1970/80s, was continually fueled by actions and reactions which were sometimes insignificant but which also brought the world closer than ever to a full scale nuclear war. ...read more.