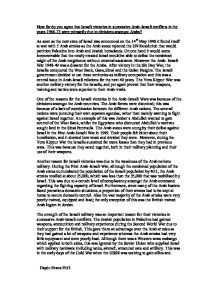 How far do you agree that Israeli victories in successive Arab-Israeli conflicts in the years 1948-73 were primarily due to divisions amongst Arabs?

How far do you agree that Israeli victories in successive Arab-Israeli conflicts in the years 1948-73 were primarily due to divisions amongst Arabs? As soon as the new state of Israel was announced on the 14th May 1948 it found itself at war with 5 Arab armies as the Arab states rejected the UN Resolution that would partition Palestine into Arab and Jewish homelands. On one hand it would seem inconceivable that the newly created Israel would be able to defeat the combined might of the Arab neighbours without external assistance. However the Arab- Israeli War 1948-49 was a disaster for the Arabs. After victory in the Six Day War, the Israelis conquered the West Bank, Gaza, Sinai and the Golan Heights. The Israeli government decided to use these territories as military occupation and this was a central issue in Arab-Israeli relations for the next 40 years. The Yom Kippur War was another military victory for the Israelis, and yet again proved that their weapons, training and tactics were superior to their Arab rivals. One of the reasons for the Israeli victories in the Arab-Israeli Wars was because of the divisions amongst the Arab countries. ...read more.

This gave them an advantage over the Arab armies as they had gained a lot of weapons and experience whereas the Arab armies had very little equipment and were poorly lead. Although there was a Western arms embargo which applied to both sides, this was ignored by the Soviet Union who supplied Israel with military hardware including tanks, aircraft, armoured cars and artillery. This was in the early days of the Cold War when the USSR was seeking to gain allies and undermine the British influence in the Middle East, before the close relationship between Israel and the United States had developed. Thus, from a position of apparent weakness, Israel was able to outman and outgun its Arab enemies and gain a decisive victory in the first Arab-Israeli War. During the Six Day War the Israelis had the most advanced US electronic equipment, which enabled them to intercept Arab communications, and they were highly skilled and well trained. This was no match against the Arab weapons that they had received from the Soviet Union, and the Israelis believed they were fighting for their nation's survival. ...read more.

Many Americans admire Israel's pioneering spirit, social and economic achievements and its democratic ideals in a part of the world where there is little democracy. Without the aid that Israel received from overseas the results of the Arab-Israeli Wars might have been very different. While the victories in the Arab-Israeli Wars were partly due to the Arab divisions, this was not the key reason for these victories. The main reason for the victories was because of the military weakness of the Arab nations. The populations of the Arab nations outnumbered the Israeli population by 40:1, so the Arab nations should had had a greater numbered army than they did. The vast majority of the Arab army was poorly trained and equipped and this meant that the army had no chance against the well prepared Israeli army. The Arab divisions were less clear in the Yom Kippur War, where the Arab nations worked better together than they had in the previous wars. Therefore the Arab divisions were not the main reason for the Israeli victories in the Arab-Israeli Wars and other factors such as the strength of the Israeli army and the international intervention that the Israelis received from the USA were also key reasons. ?? ?? ?? ?? Haydn Evans Ph12 ...read more.