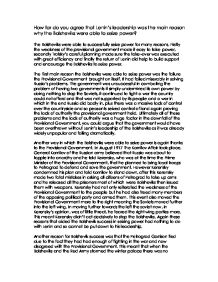 How far do you agree that Lenins leadership was the main reason why the Bolsheviks were able to seize power?

How far do you agree that Lenin's leadership was the main reason why the Bolsheviks were able to seize power? The Bolsheviks were able to successfully seize power for many reasons. Firstly the weakness of the provisional government made it easy to take power, secondly Trotsky's careful planning made sure the take-over was executed with great efficiency and finally the return of Lenin did help to build support and encourage the Bolsheviks to seize power. The First main reason the Bolsheviks were able to seize power was the failure the Provisional Government brought on itself. It had failed miserably in solving Russia's problems. The government was unsuccessful in combating the problem of having two governments it simply undermined its own power by doing nothing to stop the Soviets, it continued to fight a war the country could not afford and that was not supported by its people and a war in which in the end Russia did badly in, plus there was a massive ...read more.

Kerensky had not only reiterated the weakness of the Provisional Government to the people but he had also freed many members of the opposing political party and armed them. This event also moved the Provisional Government more to the right meaning the Soviets moved further into the left wing. In moving further towards the left the soviet now, in Kerensky's opinion, was of little threat, he feared the right wing parties more. This meant Kerensky didn't act decisively to stop the Bolsheviks. Again these reasons that aided the Bolshevik success in seizing power had nothing to do with Lenin and so cannot be put down to his leadership. Another reason for Bolshevik success was that the Petrograd Garrison fled due to the fact they had had enough of fighting in the war and now disagreed with the Provisional Government. This meant that when the Bolsheviks and the Red Army stormed the winter palace there was no resistance they simply walked in and the few Cossacks and cadets simply left. ...read more.

Trotsky was the chairman of the Petrograd Soviet and had worked on a brilliantly effective plan, with him in control of the takeover it was an almost effortless seizure of power. Also the members on the central committee who were wavering over whether or not to begin a revolution and overthrow the government were convinced now was the right time and that they had a sufficiently detailed enough plan to pull it off by Lenin, without the return of Lenin and his leading of the Bolsheviks these members may not have decided to act and the revolution may never have happened. Overall I think that although Lenin's return and his subsequent leadership did to some extent play a part in the success of the Bolshevik seizure of power it was not a key part in why they gained power. The provisional Government was already experiencing problems and because of this losing support, even if Lenin hadn't returned the government would have fallen and in my opinion this is the main reason the Bolsheviks were able to seize power. ...read more.

This is a clearly structured response that shows good understanding of the key events that led to the October revolution. There are many counter arguments that need to be considered more though. 4 out of 5 stars.