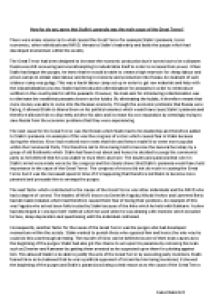 How far do you agree that Stalins paranoia was the main cause of the Great Terror?

﻿How far do you agree that Stalin?s paranoia was the main cause of the Great Terror? There were many reasons as to what caused the Great Terror for example Stalin?s paranoia, terror economics, other individuals and NKVD, threats to Stalin?s leadership and lastly the purges which had developed momentum within the society. The Great Terror had been designed to increase the economic production but it turned out to be a disaster. Russia was still recovering and was attempting to industrialize itself in order to increase their power. When Stalin had begun the purges, he knew that he would be able to create a high reservoir for cheap labour and prison camps to obtain slave labour and bring in economy and production into Russia. An example of such a labour camp was gulags. This was a harsh labour camp set up in order to get raw materials and help with the industrialisation process. Stalin had introduced collectivisation for peasants in order to reintroduce serfdom in the countryside for all the peasants. However, his main aim for introducing collectivisation was to eliminate the wealthiest peasants known as the kulaks. ...read more.

The congress of victors did not do much in causing the Great Terror but it was the increased speed in time of it?s happening that therefore led Stalin to become more paranoid and persuade him to arrange the purges. The next factor which contributed to the causes of the Great Terror was other individuals and the NKVD who had a degree of control. The leaders of NKVD known as Generikh Yagoda, Nikolai Yezhov and Laverenti Beria had all made mistakes which had therefore caused them fear of losing their positions. An example of this was Yagoda who ad not been fully trusted by Stalin because of the links which he held with Bukharin. Yezhov had developed a ?conveyor belt? method which he used when he was dealing with enemies which included torture, sleep deprivation and questioning until the individual confessed. Consequently, another factor for the cause of the Great Terror was the purges who had developed momentum within the society. Stalin wanted to punish those who opposed him and hence the only way he could do this was through arresting. ...read more.

Under Yagoda?s influence, Stalin?s old party members had questioned Stalin and therefore caused his paranoia to develop and therefore the beginning of the Great Terror. Due to Stalin being in control, it meant that this was the main cause of the great terror because he wanted to remain in power made him force for the allowance of the Great terror to happen. In conclusion, I completely agree with the statement made that Stalin?s paranoia was the main cause of the Great Terror. An example of why I think this is because Stalin was in need to divert people?s attention from his failure in economic policy such as the voting which took place in the congress of victors that did not help as it caused Stalin?s paranoia to increase as he had been outvoted by Kirov. All the factors show that Stalin?s paranoia was the central and the main cause as the other factors all show a contribution of his paranoia in them which caused it to develop further and hence the beginning of the Great Terror. Zaira Khalid 12C ...read more.

There is some awareness of the reasons for the Great Terror and the author considers Stalin's motivations as well as briefly addressing the role of others. However, the meaning of paranoia is never fully addressed and so it is unclear in places. 3 out of 5 stars.