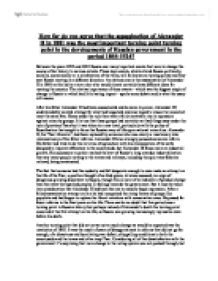 How far do you agree that the assassination of Alexander II in 1881 was the most important turning point turning point in the developments of Russian government in the period 1855-1924? Between the years 1855 and 1924 Russia saw many important events that were to change the course of her history to various extents. These keys events, which altered Russia politically, socially, economically or a combination of the three, will be known as turning points and they sent Russia moving in a different direction. An obvious one is the assassination of Alexander II in 1881 as this led to a now ruler who would almost certainly have different ideas for running the country. The relative importance of these events - which was the biggest single of change in Russia to which had little lasting impact - sparks some debate and is what the essay will assess. After his father Alexander II had been assassinated and he came to power, Alexander III understandably wanted revenge for what had happened and also hoped to ensure he would not meet the same fate. Hence under his rule there was a fairly inevitable rise in repression against minority groups. ...read more.

In this sense he continued his incompetence and the Russian people achieved very little improvement out of 1905 so large amounts of opposition and problems remained. In theory 1905 had been a big change for Russian government but in reality little changed. The only lasting legacy of the 1905 revolution was that the people had gained concession from the government for the first time and had proved that collective opposition to the ruling power could produce results. Russia had gained a taste for revolution. This taste was to be satisfied by the two revolutions of 1917 that also undoubtedly marked the biggest change in Russian government. The revolution in February marked the end of Tsardom while the one in October signaled the beginning of Communism in Russia. It is hard to place a wedge between the significance of the two as they both brought about such comprehensive change to Russian in so many ways. February was the first successful revolution in Russia and brought in a truly democratic system for the first time (even though the Provisional Government never did actually get to hold elections). ...read more.

So serf emancipation did little to develop the government but much to develop the attitudes of the Russian people towards change. In conclusion, while several points in the period 1855-1924 brought about change in Russia, be they in terms of attitudes of people or the make-up of various aspects of life, only two really changed the government - the revolutions of 1917. These were the ones that brought in completely new forms of government who had new ideas for the running of the country. The end of Alexander II's claim to the title 'Tsar Liberator' (that had begun with serfdom's abolition) as he deviated from reformist policies towards the end of his rule, marked an increase in repression. Alexander III merely continued this policy but did also encourage industrial growth in Russia and was undoubtedly more of a reactionary than his father. Nicholas II made sure that the changes introduced in 1905 were not long lasting. So it is 1917, particularly the first revolution of that year (as that gave the more start contrast to the period before), that clearly saw the biggest change in Russian government. Other events saw them change the emphasis of their policies but there was no great overhaul and as such these events are less significant in developing Russian government. ...read more.