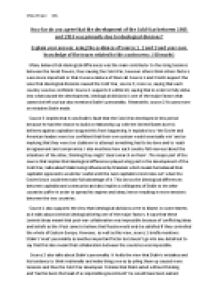 How far do you agree that the development of the Cold War between 1945 and 1953 was primarily due to ideological divisions? Explain your answer, using the evidence of Source 1, 2 and 3 and your own knowledge of the issues related to this controversy. (40 marks)

﻿Chloe Sheen 13A How far do you agree that the development of the Cold War between 1945 and 1953 was primarily due to ideological divisions? Explain your answer, using the evidence of Source 1, 2 and 3 and your own knowledge of the issues related to this controversy. (40 marks) Many believe that ideological differences was the main contributor to the rising tensions between the Great Powers, thus causing the Cold War, however others think others factors were more important or that it was a mixture of them all. Source 1 and 3 both support the view that ideological divisions caused the Cold War, source 3, more so, saying that each country was too confident. Source 1 supports it a little bit, saying that in order to fully delve into what caused the development, ideological divisions is one of the major factors that cannot be left out but also mentions Stalin?s personality. Meanwhile, source 2 focuses more on mistakes Stalin made. Source 3 implies that it was Stalin?s fault that the Cold War developed in this period because he had the chance to build a relationship up with the United States but his believes against capitalism stopped this from happening. ...read more.

Source 2 also talks about Stalin?s personality. It holds the view that Stalin?s mistakes and his tendency to think irrationally and make things worse by piling them up caused more tensions and thus the Cold War developed. It states that Stalin acted without thinking and ?had he been the head of a responsible government? he would have been sacked. However, because he wasn?t he merely ?cut his losses and proceed[ed] with more blunders?. It uses examples such as the Berlin Airlift and the Korean War. It is known that Stalin had an impulsive personality and the examples in source 2 highlight this. The Berlin Airlift didn?t give Stalin an advantage in the slightest but merely raised tensions and gained more support for the Allied countries and America as they managed to sort the ?mess? out. Instead of spreading his influence and communism he?d hoped to do by forcing the Allies and America out of the rest of Berlin and Germany, Stalin only managed to anger people and create more of a need to do something as he also highlighted the fact that he was willing to let innocent people suffer if it meant he might have a chance to fulfil his aims. ...read more.

This is seen in the Long Telegram where misunderstandings of Stalin?s motives and actions led to America preparing for battle and Stalin becoming increasingly suspicious. All this suspicion would have lead to growing worries about war and was an on-going cycle. In conclusion, ideological divisions was definitely the driving force behind the development of the Cold War because had this issue not been present, then collaboration between the leaders would have been reached easier and compromises and agreements would have been made, leading to less tensions and everyone knowing what was happening. However other factors were also important because not every clash between America and Russia was down to ideological differences, some were purely, it seemed provocation etc, for example the Berlin Blockade didn?t directly involve different ideologies but rather Stalin?s want to earn land and also policies that caused tensions such as Marshall Aid, that was only put in place to help countries that needed it but was viewed differently by Stalin. Although these other factors do play a part, I do agree that the development of the Cold War between 1945 and 1953 was primarily due to ideological divisions. ...read more.